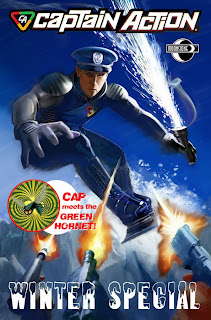 I must confess up front that I know little about Captain Action. I am familiar with the toy though I've never actually seen one in person and I did read the Captain Action # 0 that came out a few years back. That's the extent of my Captain Action knowledge so I went into this issue not really sure how well I'd be able to follow the action.

The cover proudly proclaims that in this issue Captain Action meets the Green Hornet -- and that titanic team-up does occur, though it's in the form of a prose story and not a comic tale. The story is by Matthew Baugh and hits most of the right notes. I appreciate that Moonstone is trying to mix prose and comics but I sometimes think that they're not clear enough in the solicitations or covers about what you're actually getting when you buy a book. I assumed this would be a comic book tale and was looking forward to seeing the heroes illustrated together. I did enjoy the story, however.

The opening comic strip in the issue is by Smith and Barreto -- and it lives up to both creator's past works. Beau Smith always delivers action-oriented tales and Barreto has long been one of my favorite underrated artists. There's nothing earth-shakingly new in this story and parts of it (the ending, in particular) seemed very much out of a James Bond story, which I suppose was the intent.

The Lady Action tale follows that one. I have to say that I chuckle every time I say Lady Action. "There's nothing I like better than some Lady Action!" This story is entitled "The Spy Who Snowballed Me" and that made laugh, too. The art is really nice and I enjoyed the story a good bit. I'm curious about having more Lady Action in the future. Hah! Sorry, I couldn't resist.

The final comic story is an Action Boy tale -- it shows how little I know about the Captain Action universe because I didn't know there was an Action Boy. The story follows the trend of the first two, putting the hero into a wintry setting and proceeding to tell an action-oriented story. The art was nice but seemed a little too sketchy for my tastes.

Overall, I enjoyed the issue enough to check out upcoming releases. I'm especially interested in Honey West getting some Lady Action in that team-up they teased in the ads!