Pro Se Productions, a New Pulp Publisher debuted its first title in August, 2010.  Entering its second year of Publishing after publishing an average of one book a month in its first, Pro Se shows no signs of slowing down with two new titles and the premiere of its first in house imprint all this month! 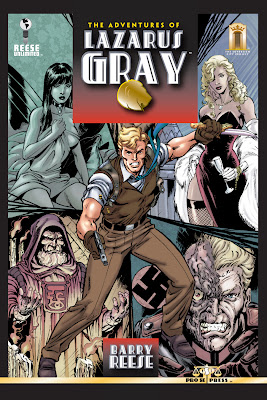 New Pulp Author Barry Reese, creator of the well known 'ROOK' series, works his storytelling magic once more with a whole new cast of characters! THE ADVENTURES OF LAZARUS GRAY is Reese's entry into Pro Se's The Sovereign City Project, showcasing a hero whose own life is a mystery to himself. On the road to discovering his own secrets Gray and his Assistance Unlimited team encounter weirdness, madness, and defend society from the evil that flows in the streets of Sovereign City and beyond! Come along for the ride for this new Barry Reese adventure, seven stories of mystery, action, and adventure that make up the first collection in The Sovereign City Project!  Thrill to THE ADVENTURES OF LAZARUS GRAY!
"There's a lot," Tommy Hancock, Editor in Chief of Pro Se Productions, "that goes into any concept, especially a shared universe such as the Sovereign City Project is going to be.  Barry being a part of this and actually laying the cornerstone of the whole world with THE ADVENTURES OF LAZARUS GRAY is not only a tremendous start, but its also the birth of another New Pulp Classic from Barry.  The characters, good and bad, jump off the page and the action moves at a breakneck speed, but there's also this eerie disturbing undercurrent that puts a different spin on classic Pulp tropes.  This is one of Barry's best works to date."  Reese's work is amplified by the fantastic cover art provided by Anthony Castrillo and the stylistic interior images  by George Sellas. 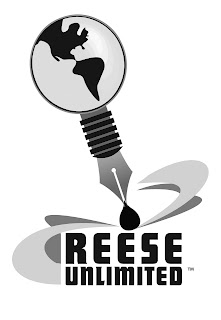 One of the most prolific writers in New Pulp, Reese has dozens and dozens of characters, adventures, and worlds that he has written or intends to write about, a wealth of ideas with plenty of room for more, both more stories and more people to write them.   "There are at least five books," Hancock stated, "in the Pro Se Publishing pipeline that are either written by Barry or based on the cyclone of ideas whirling about in his head.  Barry's also ready to see what others can do with some of his visions.  That combined with the general growth of Pro Se and the fact we intend to be an even bigger force in New Pulp in our second year made this next announcement an easy decision.  Pro Se is privileged to reveal its first in house imprint, Reese Unlimited!"
Reese Unlimited, an imprint centered around both the written work of as well as concepts created by Reese that may be written by others, debuts with THE ADVENTURES OF LAZARUS GRAY.  Already known for tales of action, adventure, fantastic characterization, and compelling storylines, Barry will bring his imagination and editing skills to bear as well with Reese Unlimited, acting as Imprint Editor and essentially being the creative force behind the entire endeavor.   This imprint will be the home of future Lazarus Gray adventures, as well as the upcoming Rook Trilogy written by Tommy Hancock and any other ideas from the fertile mind of Barry Reese. 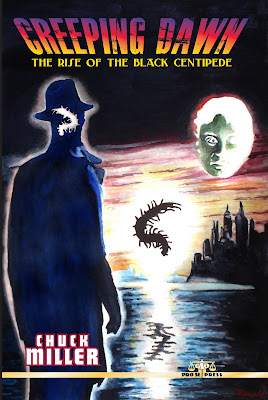 Pro Se continues its one-two punch launching its second year in print with the debut novel from author Chuck Miller.  CREEPING DAWN: THE RISE OF THE BLACK CENTIPEDE centers on the aforementioned Centipede, Miller's pivotal character in a mad, wild world of magic, mystery, murder, and almost more mayhem than it has historical guest stars.  His dark origins tied to Lizzie Borden, The Black Centipede is a mysterious individual who has no life other than that of masked avenger, vigilante, and consort of weirdness.
"This," Hancock reported, "is not just a novel.  Chuck has breathed every bit of himself into the creation of not simply this book or this character, but the insane universe that the Centipede -populates isn't a strong enough world.  He is the axis that the lunacy of everyone around him turns on and in response he's a valiant hero at some turns, a madman at others, and even the deus ex machina at times.  CREEPING DAWN is an introductory ticket to one of the wildest rides New Pulp has ever seen!
CREEPING DAWN is a fast paced New Pulp mash up of noir, masked vigilantes, historical fiction, and more mystery and suspense than a centipede has legs.  With evocative cover art by David L. Russell and interiors by Peter Cooper, CREEPING DAWN: RISE OF THE BLACK CENTIPEDE by Chuck Miller is one experience not to be missed!
Both books display the fantastic Format and Design work of Pro Se's Design master, Sean Ali.
Pro Se is thankful for the success thus far of its books and magazines and to all the supporters and fans that caused said success.  "That," Hancock said, "is why Pro Se wants to make sure our second year kicks off in a way that our readers will enjoy, giving them a double dose of the New Pulp quality they expect from Pro Se.  And that's not the only way we're saying thanks.  Things to come this year from Pro Se will blow you all away and its all our way of saying Thank You to those who support New Pulp and Pro Se."
Available now at https://www.createspace.com/3693399 and soon at www.Amazon.com!
THE ADVENTURES OF LAZARUS GRAY
By Barry Reese
Cover by Anthony Castrillo
Interiors by George Sellas
A Reese Unlimited Book
Published by Pro Se Press
List Price: $12.00
6" x 9"
250 pages
ISBN-13: 978-1466358348