Coming in October from Boom Studios. 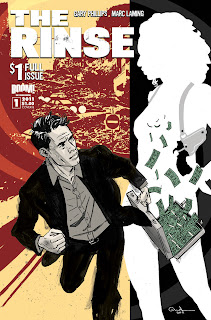 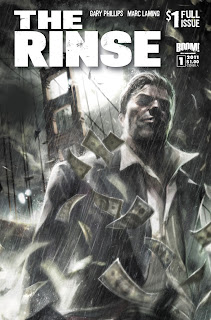 THE RINSE #1Written by Gary Phillips
Drawn by Marc Laming
SC, 32 pgs, FC, SRP: $1.00
Diamond Code: JUL110956
SPECIAL $1 DEBUT ISSUE! Acclaimed crime novelist Gary Phillips (THE JOOK, VERTIGO’S ANGELTOWN and COWBOYS) returns to BOOM! with a new brand of crime! High finance and low-down greed rear their ugly heads as Jeff Sinclair, the premiere laundryman in San Francisco—and we’re not talkin’ wrinkled jeans and dirty gym socks—is unwillingly pulled into a dangerous gig laundering $25 million in stolen casino skim money. Forced to truly consider his line of work and the evil that he facilitates, Jeff must find a way to clean the cash and wash away his own sins. A grounded, gritty look at the world of money laundering in the vein of Elmore Leonard, THE RINSE is a modern crime classic in the making! For fans of Ed Brubaker and Sean Phillips’ CRIMINAL! 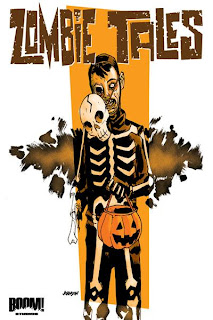 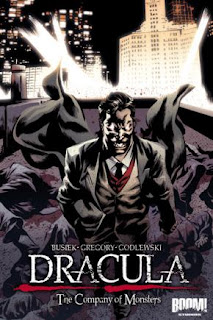 DRACULA: THE COMPANY OF MONSTERS VOL. 3 TPBWritten by Daryl Gregory, Kurt Busiek
Drawn by Scott Godlewski, Damian Couceiro
SC, 112 pgs, FC, SRP: $14.99
ISBN13: 9781608860586
Diamond Code: JUL110932
The terrifying conclusion to the critically acclaimed series from comics legend Kurt Busiek! After a powerful, predatory corporation acquires Dracula as a valuable asset, they soon discover one terrifying truth: no one can own the Son of the Dragon! As the vampire armies of the corporation and Dracula face off against each other, our hero Evan must enter into an unlikely alliance with Marta and her team of vampire hunters. As Dracula and the corporation’s fight reaches a fever pitch, can Evan and Marta work together long enough to rally a rebellion that will be able to withstand the onslaught? It's bloodsuckers vs. bloodsucker, as Busiek brings an incredibly modern spin to the Dracula mythos with award-winning author Daryl Gregrory (PANDEMONIUM, PLANET OF THE APES) and rising star artists Scott Godlewski (CODEBREAKERS) and Damian Couceiro (NOLA).
For a full listing of Boom Studios’s October Release, visit them at http://www.boom-studios.com/.

Posted by BobbyNash at 8:23 AM