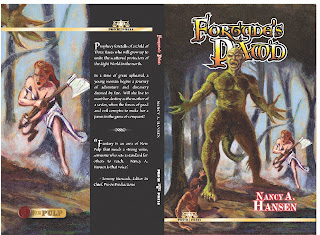 Pro Se Productions, a company specializing in New Pulp magazines and books, is proud to announce that the debut novel from Pro Se Author Nancy Hansen is the closing salvo to Pro Se's first full year of active publishing.  And this first book, entitled 'Fortune's Pawn', in a trilogy is also currently Pro Se's best selling title to date!


"We started out," Tommy Hancock, Pro Se's Editor in Chief said, "specializing solely in magazines and at that time our mantra was 'Putting the Monthly Back Into Pulp!'  When we moved away from magazines for a bit and went into anthologies and novels, the slogan didn't change and neither did the commitment behind it.  The magazines are back now and still Pro Se is all about making sure that there's a new Pro Se title on an average of once a month!  And we are extremely pleased that the work that closed our first year of Publishing was Nancy Hansen's first novel."


"The basic premise is classic and familiar," states Barry Reese of ALL PULP in a review of the book.  "A prophecy warns that a red-haired child will rise up to overthrow the bad guys so the villains are out killing everyone with red hair. One infant survives such an attack and grows up to become our protagonist. Callie is an enjoyable character and her motivations and emotions are well depicted."

The inaugural publishing year of Pro Se not only ended on a high note with 'Fortune's Pawn', but was filled with several notable works.  8 issues of the initial magazine lines kicked off the company and now, although down to one magazine, 'Pro Se Presents' has recently brought Pro Se back to the magazine business.  That combined with the debut novel from New Pulp author Tommy Hancock (YesterYear) and the continuation of the New Pulp Classic series created and penned by Barry Reese, "The Rook: Volume Six." Pro Se also created and coordinated PULP ARK, the first New Pulp Convention, this past May.
"We are beyond amazed," Hancock said, "at how quickly and how successful this year has been for Pro Se.  And there's no sign it's slowing down with all the things in the works that I can't even talk about right now.  I will say this, though.  The mantra, the slogan, it's not changed one bit."
Pro Se is definitely Putting the Monthly Back into Pulp!
Pro Se Productions- www.pulpmachine.blogspot.com
Fuller Bumpers-Chief Executive Officer
Tommy Hancock- Editor in Chief
proseproductions@earthlink.net
Posted by All Pulp at 3:25 PM