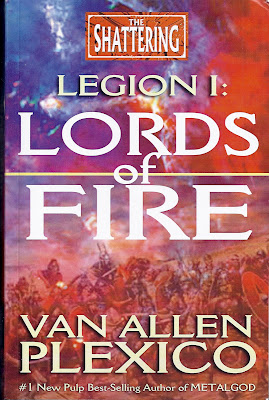 Something foul has invaded the galactic empires of mankind; something ancient and powerful beyond imagining.  Veteran space opera author, Van Plexico once again spins a tale of cosmic proportions but narrates it through the eyes of several believable characters thus bringing the reader along intimately for yet another thrill ride.

Military Colonel of the First Legion, Ezekiel Tamarlane is the protagonist in this book, the first of a new series, and he jumps onto the stage in full action mode having been ordered to steal one of the empire’s more treasured artifacts; an artifact he is personally in charge of protecting.  Thus successfully completing his secret mission he is then publicly demoted for allowing the artifact to be stolen.

Sound convoluted?  You bet it does and soon Tamarlane finds himself the target of cleverly disguised murder attempts.  When he takes his suspicions to his trusted superior and mentor, General Nakamura, he is forced to confess his own part in the theft which has created dangerous political and military ripples throughout the known worlds.  To his credit, the General’s faith and trust in his subordinate motivates him to dig deeper into the affair all of which leads to their witnessing the Emperor’s disappearance into another realm where live gods and demons. 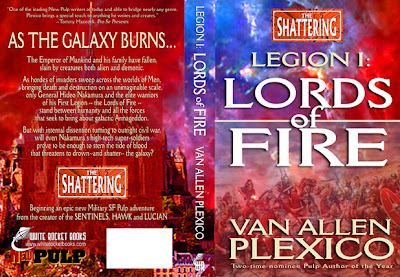 A rescue sortie is launched with Nakamura and Tamarlane in charge and what they find on “the other” side is far beyond their scope of reasoning.  That they manage to save the Emperor and his retinue is the catalyst for further attacks on both their lives until both must accept the undeniable truth that they are mere pawns in a vast conspiracy that threatens all the star kingdoms of man.

Plexico amps his already manic writing pace in this volume and readers had better buckle up because the action never stops from page one to the end.  In fact the climatic battle in the off world cathedral had this reviewer getting paper burns for turning the pages so fast.

In the end this is of course all a set up for much more intrigue and dastardly alien shenanigans.  LEGION 1: LORDS OF FIRE is a fiction stew that is both new and familiar.  Imagine “Dune” as written by Robert E. Howard and that’s the gift we have here.  This is one of the best new pulp titles of the year thus far.  Miss it at your own peril.

Posted by BobbyNash at 1:56 PM