DOC WILDE BATTLES THE FROGS OF DOOM THIS JULY! 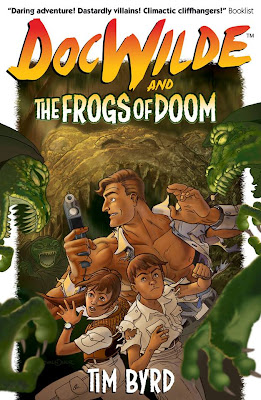 Wilde Adventure Is Back!
(And On Sale!!! Until July 1, get the Kindle or EPUB edition for $2 Off!)

"Doc Wilde swings in on a jungle vine to raise the flag high for adventure. Infused with pace, fun, and all the two-fisted action a reader could ask for..." —Zack Stentz, screenwriter, Thor, X-Men: First Class

"Written in fast-paced, intelligent prose laced with humor and literary allusions ranging from Dante to Dr. Seuss, the story has all of the fun of old-fashioned pulp adventures." —Kirkus Reviews

"A true delight...Tim Byrd has taken Doc Savage, added in a pinch of Robert E. Howard, a liberal dose of H.P. Lovecraft, and mixed it all together in a well done, enchanting pastiche of the pulps that will appeal to the adult audience as well as young adult readers." —The Baryon Review

To the world at large, Doc Wilde and his family are an amazing team of golden-skinned adventurers, born to daring escapades and globetrotting excitement. Join them as they crisscross the earth on a constant quest for new knowledge, incredible 21st-century thrills, and good old-fashioned adventure!

Now, with adventurous Grandpa Wilde missing, the Wildes confront the deepest mysteries of Dark Matter, penetrate the tangled depths of uncharted jungles, and come face to face with the likely end of the world in the clammy clutches of an ancient amphibian threat...THE FROGS OF DOOM!

"Written in fast-paced, intelligent prose laced with humor and literary allusions ranging from Dante to Dr. Seuss, the story has all of the fun of old-fashioned pulp adventures." --Kirkus Reviews

The Astonishing Adventures of Doc Wilde are written by Tim Byrd, lavishly illustrated by Gary Chaloner, and published by Outlaw Moon Books.

Now in deluxe new editions, these novels recapture the magic of pulp cliffhangers for readers of all ages. Lost worlds, ancient ruins, cool gadgets, and evil villains and daring heroes, all brought into the 21st-century with contemporary themes, modern science fantasy, the wonders of family, and a deep appreciation of literature and of the thinking life itself.

In the tradition of classic adventure stories, and modern tales like The Incredibles and Raiders of the Lost Ark, they're great for kids and grown-ups alike.

DOC WILDE AND THE MAD SKULL by Tim Byrd, art by Gary Chaloner is currently in production for release later this year.

Posted by BobbyNash at 6:00 PM