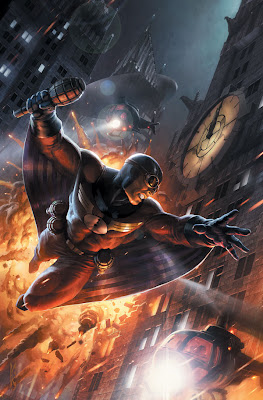 Piloting a World War II dive-bomber, Captain Midnight—fighter pilot extraordinaire and expert inventor—hurtles out of a freak storm in the Bermuda Triangle and into the twenty-first century, where he’s in for more than one surprise as he enters the modern era! Collects the three stories from Dark Horse Presents #18–#20.

“Dark Horse and writer Joshua Williamson are reaching a bit further back, pulling the titular Golden Age hero from his roots in World War II and post-war America into contemporary culture.”—Comic Book Resources

Posted by BobbyNash at 9:38 AM