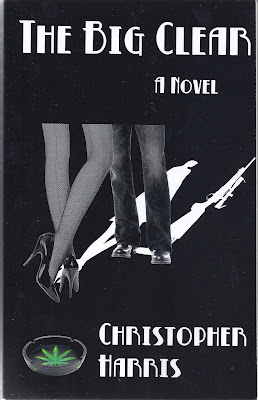 New Pulp Author Ron Fortier returns with another Pulp Fiction Review. This time out Ron takes a look at The Big Clear by Christopher Harris.

Mason “Dub” Storm was a Special Forces sniper in the first Gulf War and then worked in East African locales such a Somalia with an elite secret platoon.  In the end Storm began to question his own justifications for his assignments and just who his puppet masters really were.  Ultimately he left the service and returned to his home base of Austin, Texas to pick up the pieces of whatever remained of his soul.

As the book opens, Dub, is a two bit stoner working, whenever he can get a customer, as a private investigator.  Because of his drug connections, he comes in contact with Angela Easley, the strung out youngest daughter of one of the richest men in Texas.  Her three year old son, Hunter Parsons, has been kidnapped and she begs Dub to find him for her.  Well aware he is venturing into a world as alien to him as the foreign battlefields of his past, the weary private eye agrees to help out until the police take over.  It all seems easy enough.

Right. Until Dub recalls Angela’s older sister, and her Daddy’s chief business assistant, is none other than the high school sexpot from his youth, Heather Easley.  One look at her in her expensive mannish business suit over her hour glass, trim body and Dub finds himself floating in ancient dreams that were never ever going to come true.  Then, a friend named Kid, who had been helping him with surveillance, is brutally murdered and Dub’s hands are once again covered in other people’s blood.  Gunfights, steamy sex and a mystery with enough twists to give us a queasy stomach abound in these pages.

Harris’s style is a mix of traditional noir and punk giving the narrative a smooth jolt throughout and becomes quickly addictive.  He deftly mixes Dub’s confused present with his hellish past and when the two collide viciously towards the finale, it is a satisfying resolution though still an ambiguous one.  Dub Storm is one of the most complicated heroes I’ve encountered in a long, long time and one I’m hoping to see in action again soon.  This is a well-executed thriller by a writer worth keeping an eye out.  Go pick up “The Big Clear” and prove my point.

Posted by BobbyNash at 3:00 PM