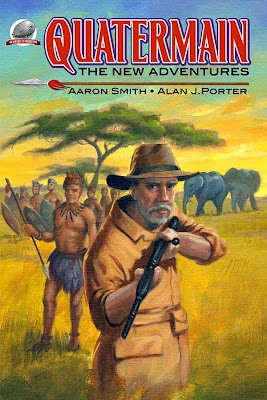 Airship 27 Productions is extremely thrilled to announce the release of our newest pulp collection starring a classic adventure hero loved by millions.

British adventure writer, H. Rider Haggard’s most popular fictional character was Alan Quatermain, the irascible African big game hunter. As the hero of the classic KING SOLOMON’S MINES, Quatermain immediately fired the imagination of readers across the world and created an instant demand for more of his adventures.

Next a naïve American lad follows Quatermain deep into the jungle to find eight missing white women only to uncover an ancient evil capable of possessing the bodies of its victim’s in Aaron Smith’s chilling “TEMPLE OF LOST SOULS.”

“We couldn’t ask for more fast paced, exciting yarns these two these,” beams Airship 27 Productions’ Managing Editor, Ron Fortier. “The affection our writers hold for this character was obvious throughout their stories and we fully expect Quatermain fans to agree. This is really old fashion pulp fun.”

Here two are complete tales that will thrill veteran fans and introduce a whole new generation to one of the most famous adventure heroes of all time; H. Rider Haggard’s Alan Quatermain.

Now available from Amazon as a hard copy and on Kindle.

Posted by BobbyNash at 3:57 PM