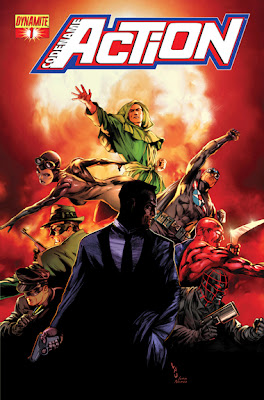 CODENAME: ACTION takes place during the Cold War, as unknown forces scheme to heat up the global conflict.  When key officials on both sides of the Iron Curtain are replaced with doppelgangers, the infiltration threatens to disrupt the precarious state of world affairs… until one young secret agent shapes the world’s masked heroes into a force with singular purpose and unyielding resolve!

“CODENAME: ACTION is a showcase of the things I love about jet-age superspies and Cold War-era superheroics,” says the World Fantasy Award-nominated author, Chris Roberson.  “In part, it functions as an origin story for Captain Action, reintroducing him to a modern audience while at the same time setting him firmly in the period in which the character first appeared.  Captain Action was a product of the time that gave us the James Bond films, and TV shows like Man From UNCLE and The Prisoner, and CODENAME: ACTION is very much an attempt to put the character in that kind of context.

Roberson, hot off of his stint as writer for the bestselling Masks series, knows how best to balance a handful of fan-favorite and highly independent characters.  “The main focus of the attention is on the spy and espionage characters like Operator 5, Black Venus, and Operative 1001 (the man who will become Captain Action).  Along the way, our heroes will encounter various masked heroes and vigilantes, like American Crusader, Green Hornet, and Kato.  It’s been an organic process, as I find the best places to fill in supporting or ‘guest star’ roles.”

Jonathan Lau, whose spirited artwork graced the pages of Dynamite titles Green Hornet and Black Terror, looks forward to drawing so many spies and superheroes with great enthusiasm.  “I’m excited!  Captain Action is sort of like Nick Fury, and there’s a dynamism in laying out the Green Hornet/Kato duo, especially when it comes to Kato making big motions to convey

action.  The American Crusader is another character I enjoy drawing again (after his appearance in Black Terror), since he’s the muscle of this series, and it’s always fun to draw super-powered beings doing super stuff.”

In a joint statement, Ed Catto and Joe Ahearn of licensor Captain Action Enterprises gave a shining endorsement:  “We’re big comic, spy and pulp fans, so it’s a thrill to see all those characters in one adventure together.  And we’re also big Chris Roberson fans from his work on iZombie and Monkeybrain Comics.  Captain Action is a spy, and impersonating others (especially superheroes) is an important part of what’s he all about… so to start the Captain’s adventures with heroes like the Green Hornet and Kato makes all the sense in the world.  We’re also honored that the baton was passed to Captain Action as he’s center stage in this mini-series.  Like a young quarterback given the opportunity to play in the big game, it’s both daunting and terribly exciting!”

LIKE" DYNAMITE'S FACEBOOK PAGE TODAY! http://www.facebook.com/dynamitecomics
Join the conversation on Dynamite Entertainment's twitter page at http://twitter.com/DynamiteComics
To find a comic shop near you, call  1-888-comicbook or visit http://www.comicshoplocator.com/
For art and more information, please visit: http://www.dynamite.com/.

About Dynamite Entertainment:
DYNAMITE ENTERTAINMENT was founded in 2004 and is home to several best-selling comic book titles and properties, including The Boys, The Shadow, Vampirella, Warlord of Mars, Bionic Man, A Game of Thrones, and more!

Dynamite owns and controls an extensive library with over 3,000 characters (which includes the Harris Comics and Chaos Comics properties), such as Vampirella, Pantha, Evil Ernie, Smiley the Psychotic Button, Chastity, Purgatori, and Peter Cannon: Thunderbolt.

Dynamite is consistently ranked in the upper tiers of comic book publishers and several of their titles - including Alex Ross and Jim Krueger's Project Superpowers - have debuted in the Top Ten lists produced by Diamond Comics Distributors. In 2005, Diamond awarded the company a GEM award for Best New Publisher and another GEM in 2006 for Comics Publisher of the Year (under 5%) and again in 2011. The company has also been nominated for and won several industry awards, including the prestigious Harvey and Eisner Awards.