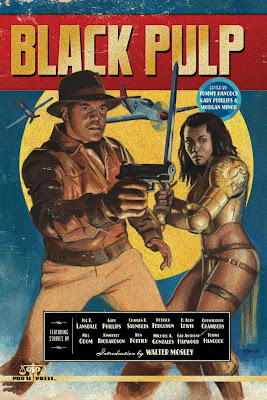 Every once in a while a book comes along that changes the playing field, that opens up new horizons where there once were none to be found. BLACK PULP is such a book.
Published by Pro Se Productions, under the careful and diligent leadership of Tommy Hancock, BLACK PULP brings together some of today's best writers to tell stories of the extraordinary, the uncanny, the arcane, but never the mundane.

My fascination with BLACK PULP comes from a deep-seated need to right an unfortunate wrong in literary history.

I am a man of color, and as a man of color, I have read countless tales of adventure and intrigue where the main protagonist was primarily of Caucasian descent. Especially, in the Pulp literature of the 1930's, 1940's, and 1950's. People of color were either non-existent, servants, savages, or villains to be defeated and subdued. Very few characters of color were treated with the dignity and respect that they deserved. Times were different in those days. Racial politics and culture were the policy of the day, especially in the Deep South, and parts of the North such as New York, Chicago, and Boston. It was a time when people of color were supposed to know their place. It was a dark time in our nation's, and to a larger extent, our world's history. And despite the fact that I now live in a time when many are trying to sugar-coat or forget that period in our history, I refuse to do so. It is a battle scar my country, and our world, must live with, and embrace, in order to go forward, which brings me back to BLACK PULP and its true importance.

BLACK PULP is a wonderful anthology of short stories that expands the world of Tarzan, Doc Savage, The Avenger, The Shadow, The Spider, The Phantom Detective, The Green Lama, Ki-Gor, G-8, Secret Agent X, Secret Service Operator #5, and their contemporaries. And BLACK PULP populates this world with hitmen, boxers-turned-vigilantes, female aviators, wildmen, mercenaries-for-hire, private detectives, femme fatales, naval aviators, freedom-fighting pirates, paranormal investigators, real life lawmen, adventurers, and many more. It is a world where men and women of color are put in dire circumstances, and readers see how they deal with these situations. And these situations are made more perilous due to the times in which these heroic figures live such as Ngola, the African pirate who fights to free all slaves, and to severely punish all slavers from slave trading nations in the early 19th century. Or the real life legendary lawman, Bass Reeves, who blazed a trail throughout the Old West in the latter 19th century. BLACK PULP shows the reader that heroes of all colors and backgrounds can arise in oppressive times when needed.

BLACK PULP is a true no holds barred, adult, and realistic take on the world of the Pulps. BLACK PULP is not for the timid at heart.

When I read the stories, I feel as if I am being transported to the times and places in which these adventures are being told. There is a lived in quality to the stories of this book. I can smell the cigars and perfumes in offices and bar rooms; I can hear tires screeching as robbers or kidnappers try to get away, with the hero in pursuit, as gunshots are heard in the night; I see and hear the clanking of cutlasses and the firing of pistols onboard slave ships, and I hear the rattling of chains being unlocked as slaves of several generations are finally freed. I experience all of this, and more.

More importantly, I can relate with the main protagonists, and their supporting cast, and see the world through their eyes. And I want to see more stories about these characters.

In fact, I wouldn't mind seeing a crossover story starring Charles Saunder's Mtimu and Damballa.Or maybe having Gary Phillips's Decimator Smith and Alan Lewis's Black Wolfe teaming up with Derrick Ferguson's Fortune McCall for a case, or two. Or perhaps having Ron Fortier's Bass Reeves and Derrick Ferguson's Sebastian Red hunt down outlaws. That is how much I love the characters of BLACK PULP. And I see so much potential for more stories with these characters, and new ones as well, who will be as alive and vibrant as Doc Savage, The Shadow, and The Avenger. There is a depth to the characters of BLACK PULP that will pull you in, and have you wanting more. And I can see a world where all of these characters can co-exist with the great legends of golden age of Pulp. I can see Decimator Smith and the Green Lama meeting, fighting each other, and then teaming up to fight the villain of that adventure. Or Black Wolfe working with Secret Agent X on a case that brings the mystery man to Port Victoria, South Carolina. The possibilities are endless. I love thinking about it. And I love that BLACK PULP allows me to think about it.

So should you pick up a copy of BLACK PULP? I think that you know my answer.
What are you waiting for? Go pick up a copy, or two! You will not be disappointed.
I'm know I'm not. I'm reading it again right now.

Posted by BobbyNash at 8:26 AM