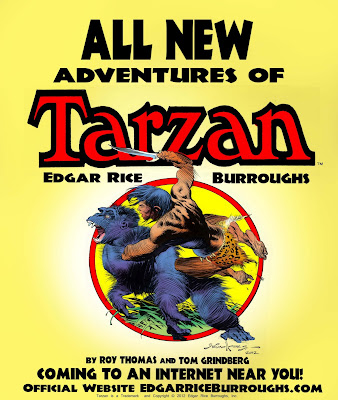 All Pulp sat down with Tom Grindberg, artist of the upcoming Tarzan Sunday Strips about the project as well as his comic book career and love of pulps.

TG: Pulps in general were their from the beginning and deserve as much place if not more importance than that other medium called comics. My interests and appreciation for the Pulps was the blend of text enhanced with pictures. So many great illustrators of that era are just being discovered by today's artists and fans and I for one am a huge fan too. I also would love to see more publishers repackage some key stories or even lessor known works to a new audience of fresh eyes. So much material could spawn and inspire this younger crop of creators coming into the business pervaded with only superheros. The pulps have so much variety and choices for any group out there looking for newer idea's to entertain.

AP: How did you get your start as a comic book artist?

TG: I went to both Marvel and DC comics back in 1981 when I was still 19 years old and began my career in comics. I went to Marvel and met Jim Shooter who was the EIC at the time and he basically asked which rock did I crawl from under and gave me my first assignment. It was an inventory job to test me out on. That same day I went to DC's offices and met Ernie Colon they're art director at the time. He offered about the same thing but did mention something about illustrating Batman, which really was not as hot as the Marvel characters at the time and since I already had a commitment from Marvel I stayed put with my first offer. Never take your first offer! Sometimes it’s best to go with your gut instincts. nuff said! 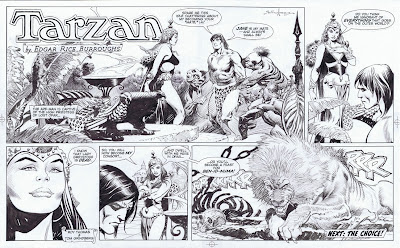 AP: With Tarzan’s 100th anniversary in full swing, you’ve landed the art duties on a new Tarzan Sunday web strip along with writer Roy Thomas. What can we expect from this new strip?

TG: Well for one thing you can bank on all new plots and art! Both me and Roy have plotted roughly years worth of material. Most of that material will happen in Africa in the 1940's before the second world war and thus allow us to bring that element if it crosses Tarzans path to be included. Tarzan, Jane as well as the Wazuri tribe are part of the cast along with La of Opar. We also want to explore as many places within the Tarzan universe that ERB created as possible. The possibilities are endless and I hope that we can entertain old as well as new readers to keep everyone interested in the strip. 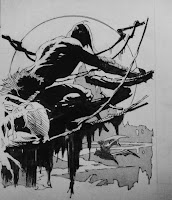 TG: Yes, we will be doing only Sundays at this moment for as long as it is feasible for us to continue a continuity strip. Essentially, its all up to you and the readers and how much of a need there is for this centennial character.

TG: Not to give too much away but I have been teasing the heck out of many on FaceBook lately and have stirred up enough peoples expectations and interest enough. They what to see more and more. I'll keep posting newer images without spoiling too much of the storyline.

AP: Do you, as an artist, approach doing Tarzan as a web comic any differently than if you were doing it for a newspaper or comic book? 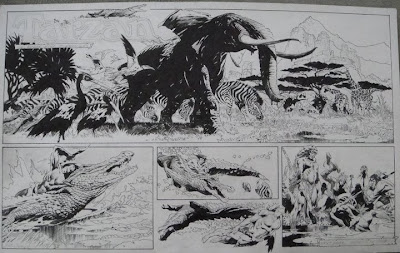 TG: Not really, only thing is that if it does go to print the dimensions of the book will be more rectangular, but other than that my I approach this with the same attitude as regular comics. Though with each Sunday your more focused on keeping the readers expectations high so that they want to see next weeks installment, I think in today's comics your allowed a bit more room to roam and not too confined. In every Sunday I am trying to give the readers as much art as possible without it looking like a pile of mini panels unless it warrants it for something narrative or cinematic. I love to create a rich and lush environment but not to overkill the entire design of each Sunday with too much or too muddy it up.

AP: There seem to be many different opinions about what can be defined as pulp. How do you define pulp and what do you look for in a pulp story as an artist and a reader? Is Tarzan a pulp hero?

TG: Initially, Tarzan was just prose written by the author with perhaps a few illustrations...In its basic form that is how I imagined pulps were then and now. I would regard pulps as text and a few pictures.

AP: Tarzan is not your first time stepping into the world of these types of pulp characters. How does working on Tarzan compare and contrast to working on Conan?

TG: Different time periods for starters. Conan world is just as dangerous as Tarzan's. Conan's world is full of wizards monsters and epic battles with Conan managing to come out on top with but a few scratches while Tarzan’s world is more modern and probably more realistic even if you can imagine a boy being raised by gorillas and then learning to speak there language and communicating with about every beast in the jungle which is of course both characters are based in Fantasy which is more interesting to illustrate. Action, adventure and fantasy is core reason why I love both characters so much and respect Burroughs and Howard characters and all their creations.

AP: Where do you see the comic book industry in the future? And how can we get the millions of fans that enjoy movies based on comic books to pick up the source material?

TG: I think I see comics moving more on line and less standing in lines. I believe computers have been a very important tool for us to get information from and that its much cheaper to operate and get your message out to millions across the world. I think this is next evolution in the world of comics and self-publishing. If it sells well online then by all means produce it in trade paperback form. I still like holding the finish product in my hands. If Hollywood and comics could join forces in a project it might create a whole new genre. I imagine motion comics or animatics may be this new direction. Static pictures are not enough for this American audience who wishes to be amazed and not bored.

AP: Is there a particular character out there you haven’t had the chance to work on that you would love to take a crack at drawing?

TG: I would like to illustrate Raymond’s Flash Gordon or Foster's Prince Valiant...So far, I have a real gem on my hands right now, that being TARZAN...I'm not complaining at all!

TG: For right now, I am on FaceBook and would encourage anyone becoming friends with me and wanting to see more of what I do this is the one stop spot for the time being. Later on, I imagine I'll be needing my own website but that's down the road.

TG: I have been offered a shot at Bruce Jones return to his book Alien Worlds and hope to be collaborating with him very soon on a few short stories produced by RAW Publications. I always, loved his collaborations in the past as well as his own art and look forward to putting both feet into something more suited to what I really like to do best which is Science Fiction Fantasy. I have been doing a few covers a year for Moonstone's licensed character Airboy but not nearly enough of anything with Dark Horse, Marvel or DC.

TG: No, but I really need desperately to get out more often and seek out my readers and art lovers. Its a funny situation when you don't produce enough material yearly to warrant going to shows to show off a few covers but, that will change once the Tarzan strip gets up and running. I live in the Brooklyn New York area and will try to be at the next Comic Con.

AP: And finally, what does Tom Grindberg do when he’s not drawing?

TG: I spend most of my time with my wife and our little daughter Katie who is now 18 months old. They are best things in my life right now and deserve so much attention for all the joy they give me.

AP: Thanks, Tom. We’re looking forward to the premiere of the Tarzan Sunday Strips.