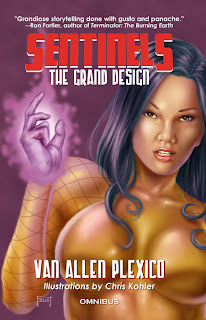 The First Trilogy of Van Allen Plexico’s Superhero Novel Series—At Last in a One-Volume Edition!
(August 8, 2012)  White Rocket Books proudly announces the release in trade paperback format of Van Allen Plexico’s SENTINELS: THE GRAND DESIGN, a one-volume collection of the first three novels in the famed cosmic superhero saga!
Weighing in at a whopping 624 pages and with a stunning painted cover by celebrated artist Mitch Foust, the “Grand Design” Omnibus also features no fewer than fifteen full-page interior illustrations by series artist Chris Kohler.
The book contains all three volumes of the first Sentinels trilogy (When Strikes the Warlord, A Distant Star, and Apocalypse Rising) in their entirety, introducing the heroes and villains (and those in between) that make up this fascinating and compelling superhero universe.
What begins as an attempted abduction of a young student from her college campus quickly spirals out to engulf a diverse collection of individuals, including billionaire inventor and hero-wannabe Esro Brachis, beloved national savior (and amnesiac) Ultraa, wisecracking daredevil Damon “Cavalier” Sinclair, and mysterious alien powerhouse Vanadium.  Can this motley crew come together as a team in time to save the Earth from conquest or destruction?
Through the eyes of central character Lyn Li, a Chinese-American teen that possesses amazing electromagnetic powers, we encounter aliens and androids, geniuses and demigods, megalomaniacal arch-villains, space-borne monsters, and everything else one would expect from a classic Bronze-Age comic series—in New Pulp novel form!
“For most of my life I’ve loved the concept of a superhero team made up of very distinct individuals who barely get along with one another,” says author Van Allen Plexico.  “The fun comes in watching them encounter mind-blowing menaces and have to find a way—some way!—to work together long enough to miraculously save the day.  Throw in the ability that a novel series provides, to allow characters to really change and grow (and even die!) along the way, and you get what I strongly believe is a saga every superhero comics fan will love.  And with Chris Kohler illustrating the whole thing, you can’t go wrong!”
Plexico’s Sentinels series has been praised by Kirkus Reviews for offering “a fresh take on the superhero theme,” and by Pulp Fiction Reviews as “spectacular, action-packed, imaginative and wonderful.”  Noted superhero novelist Ian Thomas Healy called them “Kirbyesque,” describing Volume One as “the first book that successfully translates the feel of a comic book into prose.”
White Rocket Books is a leader in the New Pulp movement, publishing exciting action and adventure novels and anthologies since 2005, in both traditional and electronic formats.   White Rocket books have hit the Amazon.com Top 15-by-Genre and have garnered praise from everyone from Marvel Comics Vice-President Tom Brevoort to Kirkus Reviews.
On sale as of August 8, 2012, SENTINELS: THE GRAND DESIGN (Omnibus) is a $21.95, 6x9 format trade paperback from White Rocket Books.  (The individual novels are already available as $2.99 e-books for Kindle and other e-readers.)
624 pages
ISBN-13: 978-0-98413-925-5 (6x9” Trade Paperback; 15 full-page illustrations)
On Amazon.com:  http://www.amazon.com/Sentinels-The-Grand-Design-Omnibus/dp/0984139257