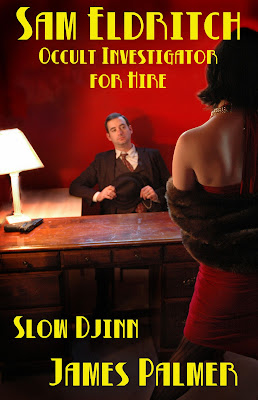 Atlanta, GA— James Palmer and Mechanoid Press have just released another Kindle exclusive melding elements of Dashiell Hammet and H.P. Lovecraft, in the first in a series blending 30's noir with urban fantasy and supernatural fiction.

Slow Djinn begins the adventures of Sam Eldritch: Occult Investigator for Hire. Eldritch is a private eye in 1930s New York, trying to cope with his newfound ability to see the world of magic that lies all around us, yet just beyond our reach.

Sam Eldritch is down on his luck. His partner was murdered by a Chinese demon, but it gave Sam a gift. Now he sees ghosts, demons, and even worse things. Things that no one else wants to know about. Kicked off the force as a laughing stock, Sam hires himself out to those who need his special "gift."

But when a mysterious Saudi businessman hires him to retrieve a stolen ring, Sam realizes he may have bitten off more than he can chew. Haunted by the ghost of his murdered partner, his only friends a Chinese sorcerer and the ingénue of a jealous crime boss, can Sam find a force so powerful it destroys everyone it touches before it falls into the hands of the local mob? Can he learn the secret of the demon who destroyed his life?

"I had a lot of fun writing this one," says Palmer. "And I have a few more stories in the beginning stages. If readers like Sam, there will definitely be more adventures."

The photo cover is by the talented J.R. Blackwell (jrblackwell.com), and represents the classic pulpy noir feel of the story.

"A lot of paranormal and urban fantasy is set in the present day," says Palmer. "And that's great, but I wanted to take it back to its pulp roots a bit. I think fans of classic occult detective characters will really dig Sam Eldritch."

This universe has several influences, from the gritty dime novel detectives to Carl Kolchak and The X-Files and books like Richard Kadrey's Sandman Slim.

"All of the characters are really colorful and interesting," says Palmer. "And there's a twist at the end I don't think anyone will see coming."

Slow Djinn is available for Kindle and in PDF format from http://www.jamespalmerbooks.com/ and http://www.mechanoidpress.com/

About Mechanoid Press
Mechanoid Press is a new publisher specializing in science fiction, New Pulp, and steampunk ebooks and anthologies. Their first anthology should be out by the end of the year. For more, visit http://www.mechanoidpress.com/ or follow the robot revolution on Twitter @mechanoidpress.

Posted by BobbyNash at 2:40 PM