MONSTER ISLAND is Available for Pre-Order!
Pulp 2.0 Press is pleased to announce their re-release of Graham Nolan’s popular all-ages book, MONSTER ISLAND for audiences worldwide. The graphic novel is now available for pre-order.

MI is the story of two pilots who crash land and become stranded on a lost island that serves as the holding area for an alien consortium that removes problem monsters from other worlds for a fee. Now our two heroes – Mac, a feisty female with two fists that do her talking for her, and Duke, a macho fighter jock with a soft spot for Mac - must learn not only how to survive in this deadly alien zoo, but escape it before Monster Island is drawn back through time and space to another point in the universe! 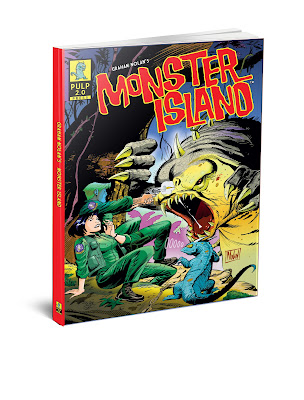 Monster Island features all of those things you loved about 1950’s classic monster movies – monsters, mysterious islands, aliens, flying saucers, and half-naked alien queens, but in a fresh, new way that piles on the fun with the fantastic! This comic is Graham Nolan’s love letter to 12¢ comic books, Aurora model kits, BUZ SAWYER comic strips, 1950’s monster movies, Ray Harryhausen and FAMOUS MONSTERS magazine. Self-published 15 years ago, Monster Island is one of those books that you can hand anyone of any age and they will immediately “get it.” Those are the kinds of projects we adore here at Pulp 2.0 – and we know you will too!
The original 48 page story
The never-before-seen Monster Island comic strip
An interview with Graham Nolan on his artistic influences
Background and commentary on the creation of Monster Island
Character sheets, sketches, layouts
A brand new cover by Graham Nolan
80 pages – 30 of which are brand new!

To order go to: http://pulp2ohpress.com/monster-island-is-available-for-pre-order/

You can preview the comic strip version by going to our Facebook page.
Posted by All Pulp at 8:24 AM