THE SKINVESTIGATOR INVESTIGATES ON KINDLE 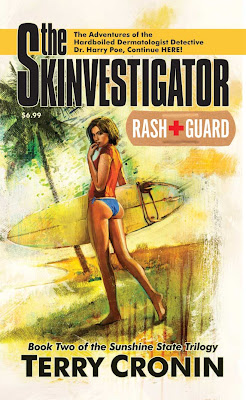 The second novel in a new Florida noir trilogy, The Skinvestigator: Rash Guard has just become available for download on the Kindle, Amazon.com's handy digital reader. The novel follows the adventures of Florida dermatologist turned detective, Dr. Harry Poe, as he tries to help the Miami Police with a new murder investigation involving surfers, syphilis, and the State department.

Author Terry Cronin describes the surf noir story as both "an inside look at the exciting world of South Beach" and "a mystery novel that quickly escalates into a medical/political thriller involving tattoos, sexually-transmitted diseases, illicit cosmetic surgery, and murder".

Ripped from today's headlines about "scalpel tourism" where Americans travel to foreign nations to get cheaper cosmetic surgery, Cronin's books have been described as "razor sharp"and "skincredible". Reviewers have categorized them as "sunshine noir", and made "for page-turner mystery fans". The print version of the first novel is distributed by Atlas Books and is available at Amazon, Barnes and Noble and Tower Books. 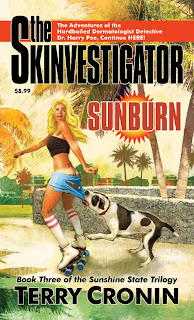 While the Kindle version of the first novel, The Skinvestigator: Tramp Stamp, is promotionally priced at 99 cents for a limited time only!

The final book of the Sunshine State Trilogy, The Skinvestigator: Sunburn has been released as a print edition. Cronin, who is known for creating the critically-acclaimed horror-adventure comic series, Students of the Unusual and writing for Indie Comics Magazine, took advance copies of this new novel with him to the San Diego Comic-Con this year. "I'm known as a comic book writer but I found that comic readers and genre fans also enjoy reading hard-boiled detective novels and pulp fiction." The new novel follows Doctor Poe whose been abducted by Venezuelan thugs from his past and is poorly prepared for their increasing level of violence. Sexy mysterious tattoos, illicit cosmetic surgery, and espionage round out book three of the Sunshine State Trilogy and may just mark the end of the career of the Skinvestigator.

The Kindle version of The Skinvestigator: Tramp Stamp can be downloaded here:
http://www.amazon.com/The-Skinvestigator-Sunshine-Trilogy-ebook/dp/B005OCTWVM/ref=sr_1_3?ie=UTF8&qid=1344462348&sr=8-3&keywords=skinvestigator

The Kindle version of The Skinvestigator: Rash Guard can be downloaded here:
http://www.amazon.com/The-Skinvestigator-Sunshine-Trilogy-ebook/dp/B008UFHNTS/ref=sr_1_5?ie=UTF8&qid=1344462348&sr=8-5&keywords=skinvestigator

The new print edition of The Skinvestigator: Sunburn is available at:
http://www.amazon.com/The-Skinvestigator-Sunburn-Terry-Cronin/dp/0983766711