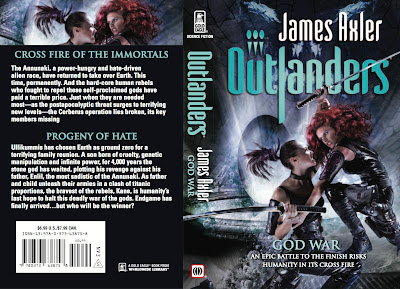 The heroes are at their lowest ebb, mankind has reached its darkest hour, and all of free will hangs in the balance.  With their numbers depleted and their trusted colleague in the thrall of the enemy, the heroic Cerberus warriors are forced into a multidimensional war between men and would-be gods with Earth as the prize.  Before this day is over, history will be remade forever.
This volume of the modern-day pulp sci-fi series is written by Rik Hoskin and finally draws together the threads he’s laid out over the past four years/15 books.  New readers should not be daunted, however - the book can also be read as a stand-alone.
About the author:  Writing as “James Axler”, Rik Hoskin has been the primary author of the Outlanders series since 2008 as well as contributing several volumes to James Axler’s Deathlands.  He is also a comic book author and has written Superman for DC Comics, helped develop a successful Spider-Man series for Marvel Comics’ European licensor, Panini and currently writes for Star Wars: The Clone Wars Comic as well as several younger readers titles.
http://www.fantasticfiction.co.uk/h/rik-hoskin/
Posted by All Pulp at 1:01 PM