FORTIER TAKES ON 'EMPIRE OF THE SUMMER MOON!'


EMPIRE OF THE SUMMER MOON 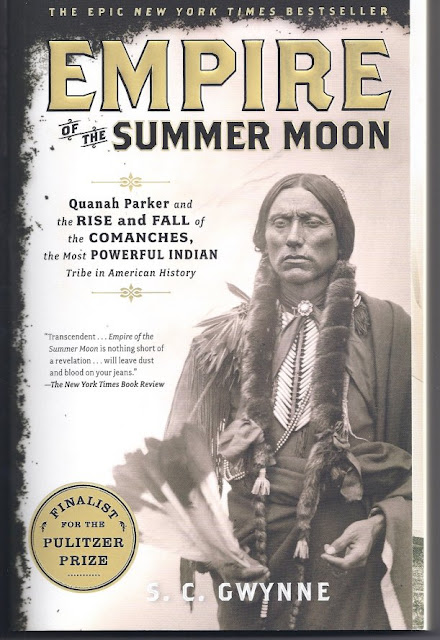 I love history, always have.  What has always fascinated me about the people and events of the past is how truly amazing their stories were and sadly how many have been either forgotten in time or completely been altered through the lens of imperfect history.  Thus the true pleasure of this amazing book by S.C. Gwynne in detailing the story of the western plains empire known as the Comencheria that encompassed a giant land mass from Colorado down through Oklahoma, New Mexico, Texas and into Mexico between the years 1836 and 1875.
Of course recalling some truly boring history classes in both high school and college, I long ago learned that the best histories are those that both entail the big picture of the social, cultural and economical movements that have shaped people at the same time refining this focus by spotlighting particular individuals representative of these greater factors.  Gwynne does that to perfection with this book as he sets out to relate the captivating story of the most powerful Indian tribe of them all; the Comanche, considered the best horse soldiers who ever rode into combat.
Sadly most Americans my age first learned their western history via Hollywood movies and television which over the decades offered up two totally different and conflicting images of the American Indians.  From the silent movie era on through to the 1940s, the red men of the plains were portrayed as merciless savages. Then, after the second World War into the sixties, the pendulum swung radically in the opposite direction and they were showcased as the noble aborigines victimized by the onrushing invasion of the European bred white society and its Manifest Destiny.  Unfortunately both depictions, though containing kernels of truth, are gross exaggerations and for the most part equally untrue.
Gwynne, employing recorded accounts from various libraries, allows them to detail a race of nomads who lived off the massive buffalo herds that covered the plains and were constantly battling each other for supremacy.  War was their way of life and they were good at it, inflicting as much destruction and carnage on their foes as they were capable of which included killing women and children, enslaving others and torturing captives. They expected no less from their enemies were they to be defeated.  It was a cruel and barbaric way of life totally alien to anything whites of the time had ever experienced.
And as engrossing as this account is, the book then delves into the lives two of the most remarkable characters to have walk across this stage of time; Cynthia Ann Parker and her son, Quanah.  Kidnapped at the age of nine by the Comanche, Cynthia Ann was favored by them and as she matured became a true member of the tribe that had taken her eventually marrying a war chief and having three children with him; two boys and a girl.
The oldest, her son, Quanah, would go on to become the last and perhaps greatest Comanche war chiefs; a brilliant horseman, strategist and fearless in battle.  When Cynthia Ann was recaptured by U.S. Cavalry troops in a raid that killed her Comanche hasband, Quanah, twelve at the time, eluded the soldiers and with his younger brother in tow, escaped to find another related tribe.  From that point on he was on his own, a half-breed having to survive in a society that made no allowance for orphans. Through his inner strength, courage and intelligence, he became the Comanche’s most successful war chief and in the end, when the threat of total extermination loomed on the horizon, Quanah had the foresight to surrender and adapt to the new west; that imposed on him and his tribe by the victorious white invaders.
So much so, that by the time of his death, he was a famous, successful farmer who counted Teddy Roosevelt amongst his associates and allies.
“Empire of the Summer Moon,” was a finalist for the coveted Pulitzer Prize and this reviewer believes it should have won.  It is a truly powerful reading experience proving once again that truth is always stranger than fiction.  Amen.
Posted by All Pulp at 6:59 PM