FORTIER TAKES ON 'WRITTEN IN TIME'! 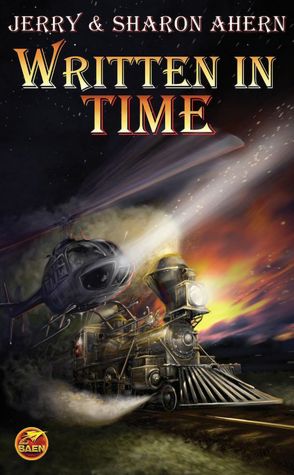 Trying to decide what book I wanted to take with me when traveling to the Pulp Fest Convention in Columbus, several weeks ago, I grabbed a paperback that had been sitting on my To-Read stack for a few months.  It was “Written in Time,” by Jerry & Sharon Ahern and appeared to be an action-adventure science fiction novel dealing with time travel; a favorite sub-genre of mine. While packing the book away in my backpack, a niggling memory surfaced in my mind about a particular post I’d seen recently on Facebook concerning a writer’s recent passing.  For whatever reason, Ahern’s name was the one I remembered.  Sadly my memory proved to be working just fine because, after finishing this truly excellent novel, I discovered that Jerry Ahern, age 66, had indeed passed away only last month, 24th July, 2012.
From what I gathered, he and his wife were best known for their sci-fi series called, “The Survivalist,” about an American family surviving in a world ravaged by a nuclear war.  One of the hallmarks of Ahern’s writing was his expert descriptions of hand weapons employed in his fiction as he was himself an authority on handguns and contributed to many well known magazines such as “Guns & Ammo.”
“Written In Time” mirrors the Aherns a great deal as the protagonists are Jack and Ellen Naile, a popular husband and wife sci-fi writing couple.  One day they receive a photo in the mail sent to them from a fan in a small Nevada town.  The picture, a clipping from the local newspaper dated 1904 shows Jack, Ellen, their daughter Elizabeth and son David all wearing western garb and standing before a general store bearing their name, “Jack Naile – General Merchandise.”  After several tests the two come to believe that the photo in the clipping is authentic and not a hoax; meaning sometime in the near future some bizarre event is going to hurl them almost a hundred years into the past.
From this point forward, the Nailes set about planning for the event and doing their best to prepare themselves for their new life in the past.  Eventually the freakish event occurs and our cast is sent back in time.  There they slowly begin to adapt to turn of the century living and the challenges it presents them while being careful not to affect any changes that may alter the future itself.
Unfortunately the Nailes’ nephew, Clarence, having been told of their coming time travel adventure becomes obsessed with duplicating the phenomenon and joining them in the past.  In the process of successfully achieving this goal, he inadvertently sets into motion actions that ultimately expose their experience to an unscrupulous businesswoman.  Being immoral, she sees the potential for riches and power to be won by shaping time to her own will.  When Jack and Ellen become aware of this new faction that is about to invade the past to control the future, they scramble to find allies to help them thwart her deranged plans and save history.  The person they recruit to their cause is none other than Vice-President Theodore Roosevelt.
The true fun of this book is that it really is two books in one; a fantastical science fiction adventure and a bona fide western actioner.  The Aherns pull this off seamlessly and after finishing the book, this reviewer had to wonder if in the writing, both of them saw it as a very special, intimate dream fulfillment to cap their writing careers.  That it would be their last book together lends a poignant credibility to that idea.
Sixty-six in our age is not a long time and yet Jerry Ahern seems to have filled it to overflowing with living a life of love and creativity.  After reading, “Written In Time,” it is clear we’ve lost a truly gifted and original voice.  R.I.P. Jerry Ahern and thanks.
Posted by All Pulp at 6:19 AM