FROM PULP 2.O PRESS
Our December release gets mentioned in The Huffington Post:


A 25th Anniversary Edition of your Sherlock Holmes meets Dracula graphic novel, Scarlet in Gaslight, is being published in December. How does that make you feel?

Very lucky! Scarlet in Gaslight has been, in many ways, my most significant book since it was the start of everything for me. This was during the Black and White Glut of the 1980s, as it was called, and I never ever thought the book would survive beyond that time. This will be its seventh printing. Miraculously, it's never been out of print, and continues to enjoy a new life. The Washington Post recently gave the book a very flattering review. Sherlock Holmes has been very good to me. 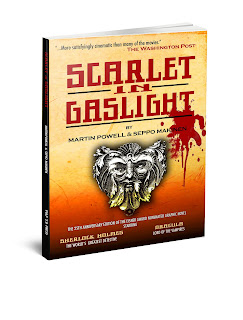 Coming to you in December via Pulp 2.0 Press. The graphic novel The Washington Post said is, " ...more satisfyingly cinematic than many of the movies"
Posted by All Pulp at 10:00 PM