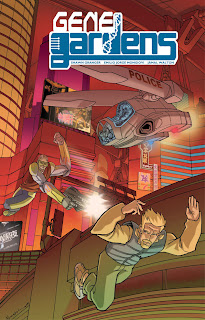 Time has almost run out on the small blue planet, and the human race has been split into two; the mutants and the clones. Nations regrouped and reformed, the United Americas and Asia Proper being two of the emerging super powers. The wars now centralize on the hoarding and stealing of DNA, the most prized commodity on earth. Countries frequently raid one another just to steal DNA samples and clones for breeding. In Asia Proper cities the bored youth have created neo-traceur gangs, organized from stories of free runners from the 21st Century. Two in particular are big in the capital Alliance, the Le Parkours and Yamakasi. Through their eyes we learn of hidden agendas, sublime plots, and schemes that may end up breaking this already fragile world.

Gene Gardens is a story about people surviving any way they can in a ruined world they didn’t create. It’s the human experience, cloned. Gene Gardens is like a Takashi Miike sci-fi graphic novel…if he did that sort of thing. Lots of gratuitous sex, over-the-top violence and crazy situations. This is definitely for mature minded people. 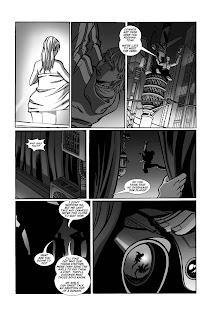 "I've been working on Gene Gardens since 2004 and then Jorge joined me in 2007," says Granger of the project. "It takes us a while to get it just right. I have struggled with just the right vehicle to bring out Gene Gardens and finally settled on first publishing as a webcomic. It should allow for a more community interaction, which is one of the main threads throughout the Gene Gardens universe. I’m excited to see what happens. I also would like to put out chapters in digital form and maybe even print them eventually for fans who don’t want to wait for the Wednesday updates."

New Gene Gardens pages are posted every Wednesday at http://www.genegardens.com/.

Gene Gardens is recommended for Mature Audiences.
Posted by BobbyNash at 2:25 PM