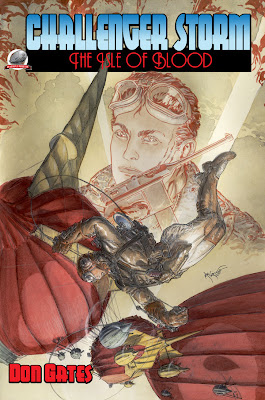 Airship 27 Productions and Cornerstone Book Publishers present another new pulp hero crafted in the mold of the classic 1930s adventurers. The sole survivor of a senseless tragedy, the heir to a massive fortune devotes himself to a life protecting the innocent and punishing the guilty. From his base of operations at the Miami Aerodrome Research & Development Laboratories, he and his colorful associates brave any danger to bring justice to those in need.

His name is Clifton Storm... the world will call him "Challenger".

THE ISLE OF BLOOD

When a wealthy aviation tycoon asks Storm to help return his kidnapped daughter, the MARDL crew is plunged into a rescue-mission on the tiny island-nation of La Isla de Sangre. From the sunny streets of Miami to the assault on a guerrilla enclave & the ruins of a lost-city deep in the jungle, the action is non-stop in this debut pulp thriller. Can Storm rid La Isla de Sangre from the vicious warlords known as the Villalobos Brothers and defeat the mysterious Goddess of Death?

Join Challenger Storm and his loyal band of adventurers as they fly off on this, the first of a brand new series of pulp thrillers. Writer Don Gates and legendary graphic artist, Michael Kaluta join forces to unleash this exciting and original new pulp hero guaranteed to provide pulp fans with explosive thrill-a-minute entertainment. All brought to you by the always ground-breaking crew of Airship 27 Productions; Pulp Fiction for a New Generation!