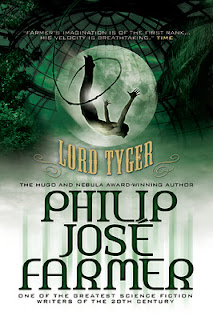 Third in Titan's lineup is Mr. Farmer's Lord Tyger, considered by many to be Mr. Farmer's finest standalone novel. First published in 1970, the novel tells the tale of Ras Tyger, who is kidnapped by an insane millionare bent on recreating the famous Lord of the Jungle. Tyger is raised in a remote African valley by people he believes to be apes; heroic, and beautiful, he is master of his world. And he rules his kingdom with sex, savagery, and sublime innocence. But the laws of nature and those of man are set to collide....

Lord Tyger is currently scheduled for release in July 2012, and will be available at major outlets such as Amazon and Barnes & Noble. Editions will include trade paperback and digital (Kindle & Nook).