Reviews from the 86th Floor: Barry Reese looks at 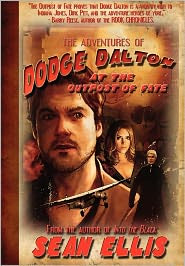 Sequels can be funny things - deviate too much from what the original successful and people wonder what went wrong. Adhere too much to the first one's formula and people cite you for being unoriginal. The Adventures of Dodge Dalton At The Outpost of Fate manages to dance along that delicate line that's needed to create a worthy successor to last year's debut. Sean Ellis reunites us with a character who's a canny mix of Indiana Jones and Dirk Pitt, with the intriguing setup that our main character is the ghostwriter for the adventures of the "real" hero.

Ellis manages to infuse his novel with romanticism and good old-fashioned by-the-seat-of-your-pants adventure. Without giving too much of the plot away, this is another globetrotting epic with plenty of narrow scrapes for our heroes and a satisfying ending.

It's inevitable that a second adventure seems less "new" than the original but Ellis is more comfortable now and the characters more nuanced. The Dodge Dalton series is one of the best New Pulps to come along.