Percy Constantine's new novel THE MYTH HUNTER from Pulpwork Press (http://www.pulpwork.com/) hits the streets today!  The author takes some time out of his busy promoting schedule to do some...ah...promotion with ALL PULP!  Stay tuned for a couple of more tidbits related to THE MYTH HUNTER throughout the day!


AP:  Perry, welcome to ALL PULP!  First, share  a little bit about yourself with us. 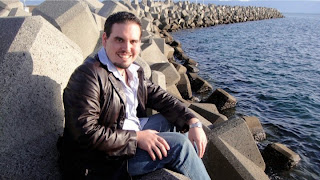 PC: Well, I'm a writer in his late twenties (going to hold onto that tidbit for as long as possible). A native Chicagoan who has been residing in Japan for the past few years. I first entered the world of publishing in 2005 as a comic book editor and then in 2007 as a novelist. In 2010, my first pulp novel, LOVE & BULLETS, was released through Pulpwork Press. I'm also a professional comic book letterer and writer and have a few small press credits to my name in those areas. Other than that, I'm obsessed with movies, which is where I draw most of my inspiration from.
AP:  Your newest book, THE MYTH HUNTER debuts today.  What wonderful adventure awaits within its pages?
PC: With THE MYTH HUNTER, you are looking at an action-packed tale bringing mythology from various regions and eras into the modern age. You've got shadowy organizations, legendary creatures, lost continents, and a heroine who can both kick your ass and outsmart you.
AP:  Now, this project has taken some time to actually see print.  What can you say about that?
PC: THE MYTH HUNTER first began with Elisa Hill, the main character. I've always been drawn to heroines who can hold their own against the classic hero archetypes and I wanted to create one of my own. Derrick Ferguson (creator of the brilliant Dillon series) helped me with some of the initial ideas that really led to the character's first incarnation. 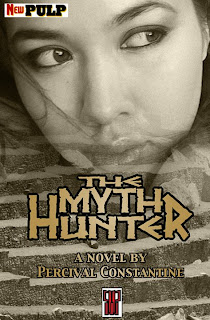 At first, THE MYTH HUNTER was intended to begin life as a comic book that Derrick and I were going to collaborate on with whatever artist we could locate. It didn't quite work out that way and after a few setbacks, I decided to just do it as a book series. I had two artists who contributed some character designs, which will appear on my blog (percivalconstantine.wordpress.com).
AP:  You’ve created a character in Elisa Hill that is multifaceted and seems to, while being your creation, draw from several ‘muses’.  What were your influences in creating her and why is it important that a lead character have such variety within its personality?
PC: I'd say my primary influences for the character were Indiana Jones and Lara Croft, as far as initial inspiration. Visually, I've always imagined Elisa as being similar to actress Kate Beckinsale. Her name was inspired by someone I knew in high school who's a very strong woman. Buffy the Vampire Slayer was also a source of influence, as I've found her to be a very positive, very strong heroine and she was really the first heroine who had a massive influence on me.
Other than that, I draw influence from wherever I can find them. Elisa, like many of my characters, are drawn from a hodgepodge of influences. But the ones I mentioned are really the major ones.
AP:  You’re known for writing strong female characters, particularly as leads.  Do you prefer female leads and if so, why? Or does the story just sort of write its own participants in as you go?
PC: I appreciate the fact that I've become known for strong female characters, as that's important to me. I've felt heroines are either under-represented or portrayed as inferior to the heroes. I guess part of that is because I've known a lot of strong women in my life, and so I want to give them their due.
I don't have a preference for either gender, though. My first two novels featured male leads. And the next book in my Infernum series, OUTLAW BLUES (due for a release either later this year or early next year) will feature a male lead.
I'm attracted to aspects of both types and I enjoy writing them both. It's more the characters themselves that speak to me and when they first come to me in my mind, they come with their gender already predetermined. I never thought of Elisa Hill or Angela Lockhart (of LOVE & BULLETS) as anything other than female, just as I never thought of Riker Stone (of CHASING THE DRAGON) or Gabriel (of FALLEN) as anything other than male. That's just how they were when they first approached me.

AP:  THE MYTH HUNTER treads familiar ground for Pulp fans, that of the explorer finding strange artifacts, etc.  But you focus on the dichotomy of doing this for profit as opposed to doing it for betterment of mankind. Care to discuss that?
PC: The idea of profit vs. betterment of mankind has always interested me. And I know that the two aren't mutually exclusive, which is something you see a little bit of in the book. I don't think there's a black and white way to look at the two. I'm someone who believes in a balance and I think I try to get that across in the book. You see aspects of both in the characters on either side of the issue. Some are doing it for profit and are completely selfish. But some aren't doing it for profit but are still equally selfish. And some fall to a place in the middle.
Dichotomy in general is something I really love to explore as a writer. To be, the best heroes and villains are the ones that are two sides of the same coin. So that's why I try to focus on those things in my writing whenever I can.
AP:  This novel is peppered with a ton of interesting supporting characters as well.  What makes a good supporting character for a Pulp tale?  And why does a strong lead like Elisa even need supporting cast?
PC: It's often been said that you can't have a good hero without a good villain, and that's true. But you need more than that--you need good supporting characters. The supporting characters are not just there to support the hero, they're also there to challenge him or her in ways that the villain can't.
The various supporting characters are there to explore different facets of the hero. With Elisa, I think you see that a lot with her supporting players because they reflect different aspects of her. Max Finch is her experience and knowledge, Laki is her innocence, Lucas is her rebellious nature and Asami is her desire for adventure. Each of them are great characters in their own right, but when they interact with Elisa, it really helps to round her out as a better character.
AP:  You’re in the ranks of the New Pulp writers.  What is New Pulp to you?
PC: New Pulp to me is taking these classic techniques and aspects that made "old" pulp so great and seeing how we can add to them. I think New Pulp isn't just doing what Lester Dent, Robert Howard, and others did back in their time. It's taking what they did as an inspiration and building on it, incorporating influences from other writers who followed a similar path.
As Bob Dylan said, the times they are a'changing. And we have to change with them. We can't just copy what the pulp founders did, because what they did was influenced from what they knew at that time. We have to build on it. We have to take what they did, incorporate what we've learned since then, and use it to create something that's different, that's relatable to modern audiences (regardless of the time period the story is set in) but still recognizable as pulp. One of the brilliant things about Indiana Jones is that even though the films were set in the age of pulps, they were still relatable to modern audiences.
And this can be done in a number of different ways. As Indiana Jones and authors like Barry Reese have proven, you can set these stories in the age of pulps and make them relatable to modern audiences because you have the benefit of hindsight or because you understand the tastes of modern audiences. Or you can take the route that the James Bond series or authors like Derrick Ferguson have done, which is take that style of storytelling and apply it to the modern day.
There are some people who believe that it has to be either or. You can't appeal to modern audiences without alienating fans of the past or vice versa. And this kind of thinking is really lazy and uncreative. I was born in 1983 and yet Casablanca, a movie that was made decades before I was born, remains one of my favorite films of all time, and I know many people my age who feel the same. So to say that the past holds no appeal for the present shows creative bankruptcy in my opinion.
AP:  Any future plans for Elisa and company to return in future works?
PC: Oh absolutely. The sequel, DRAGON KINGS OF THE ORIENT, already has a draft that's been completed. There's no tentative release date for it yet, but it will be a bit of a wait. I've got some other tales in mind for Elisa and friends following that.

AP:  Speaking of future, anything else coming from you that ALL PULP should be on the lookout for?
PC: A few things. OUTLAW BLUES, a follow-up to LOVE & BULLETS and the second book in the Infernum series, is due for a release either the end of this year or early next year. As I've also mentioned I've got DRAGON KINGS OF THE ORIENT, the sequel to THE MYTH HUNTER.
Other than that, I'm writing a Domino Lady comic story for Airship 27's All-Star Pulp Comics anthology and Tommy Hancock and I are developing a project called THE ADVENTURES OF NICHOLAS SAINT.
I also have a few other things in mind, but it's a bit too early to talk about those at the moment.
AP:  Thanks again for stopping by and great work on THE MYTH HUNTER!
PC: It's been an absolute pleasure and I hope everyone enjoys it! Also, please keep an eye on my site, percivalconstantine.wordpress.com, because we'll soon have some announcement about giveaways to be associated with the release of THE MYTH HUNTER!
Posted by All Pulp at 10:14 AM