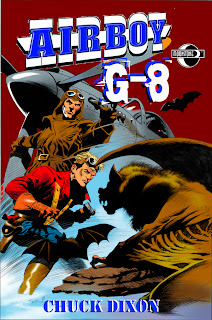 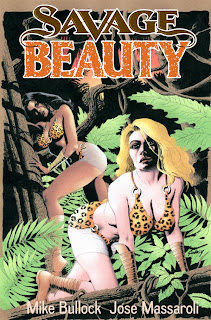 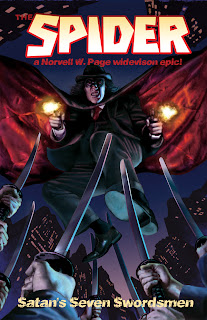 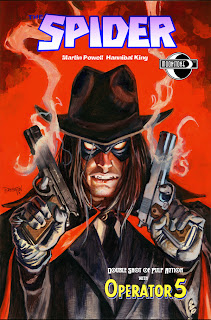 The Spider #3/4
Story: Martin Powell, Gary Phillips
Art: Hannibal King, Jay Piscopo
Cover: Dan Brereton
56pgs, grayscale, $5.99
The never-offered issue #3 and #4 together in one brand new book!
The Spider faces a monstrous flesh-eating evil that attacks invisibly from the
filthy shadows, leaving doomed New York City in a panic-stricken state of
hysteria and gruesome sudden death. None are immune to the plague of the
Creeping Hell, not even Nita Van Sloan, the Spider’s beloved.
PLUS: more Operator5 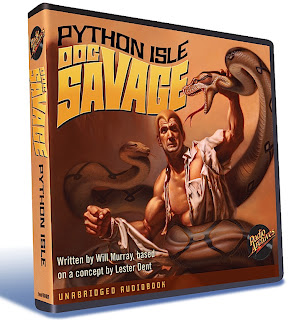 DOC SAVAGE: Python Isle – Unabridged Audiobook
Written by Will Murray, based on a concept by Lester Dent Narrated by Michael McConnohie Produced and Directed by Roger Rittner Cover Art by Joe DeVito
8 CD’s, $25.98
ISBN: 9781610814010
The greatest pulp fiction hero of the 1930s returns in the first of a new series of audiobooks! Doc Savage, the legendary Man of Bronze, captivated adventure readers of the 1930s and 1940s in his own pulp magazine and in the 1960s, 1970s, and 1980s in the million-selling paperback series for Bantam Books. In 1990, Will Murray, heir apparent to Doc Savage originator Lester Dent, revived the famous Street & Smith superhero in a new series of exploits based on Dent's unfinished works. Writing as Kenneth Robeson, Murray brought Doc Savage back with "Python Isle", a dramatic account of a long-lost pioneer flyer who returns to civilization with an exotic woman who speaks a lost tongue. From his towering skyscraper headquarters in New York, through a dangerous Zeppelin journey to Cape Town, climaxing on a serpent-haunted island in the forbidden reaches of the Indian Ocean, Doc and his iron comrades race to untangle a weird puzzle so deep the only clues can be found in the Bible!
------------------------------------------------------- 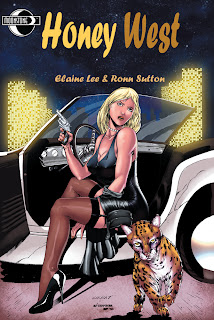 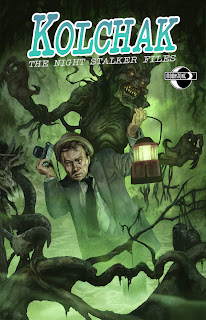 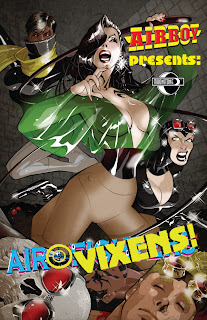 RES: Airboy Presents: AIR VIXENS#1
Written by Mike Bullock
Art: Ben Hansen
Colors by: Bob Pedroza
Cover A : Ben Hansen
Cover B, C :Franchesco!
32pgs,grayscale, $3.50
More story pages than ever before!...new format, cheaper price!
From the pages of Air Fighters comes the first issue of Air Vixens starring Black Angel, Bald Eagle and Valkyrie.
When Der Furher sent Valkyrie to smuggle secret weapons and intelligence across Europe in a zeppelin, he didn’t expect Black Angel and Bald Eagle to crash the party, and neither did they.
Tune in for the first issue featuring the high flying femme fatales of the Air Fighters in this oversized, bombastic first issue!
Posted by All Pulp at 8:14 AM