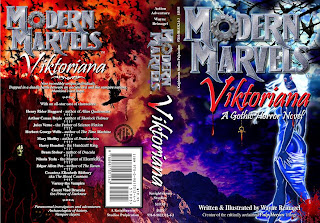 As with the author's previous books, this one is epic in scope and features multiple plotlines that all converge at the end. This time around numerous famous authors and figures are put into adventurous settings, as we learn (for instance) that the man who wrote Dracula actually had battles with the undead.

Let me start by saying that Wayne Reinagel is the most perplexing author in the New Pup movement. He writes the best action scenes in the biz but he also has several habits that drive me nuts. For instance, the opening chapter pits H Rider Haggard against a horde of vampires. It's thrilling and was so good that I actually told my wife while reading it, "This guy's the best pulp author alive today." Then, less than twenty pages later, I told her, "Argh! He's doing That Thing again!"

Now, don't get me wrong. Wayne's characterization and action scenes are so good that I'm willing to overlook the info-dumps and I strongly encourage others to try his work if they haven't already. The concepts here are fascinating and I love the way he ties characters together. There were scenes here that made me laugh, some that made me nearly tear up and even some that caused me to lean forward in anticipation. It's that good -- it's just that there are things that, for me, keep this from being an absolute classic.

I really feel that Reinagel is one of the top five authors in the New Pulp movement. Depending on what chapter I'm reading at the time, I might even say he's the very best.

This is well worth a look and continues a trend of each book by Reinagel being better than the previous one.