Saturday, May 14th, 2011
After the final panel ended for the day, most of the stalwart band of PULP ARKers, guests and fans alike, went out for a nice, large dinner at Colton's Steak House.  The table filled with over thirty guests went from one wall of their largest room to the other.  As had quickly become the norm, great fun and camaraderie was had by all. 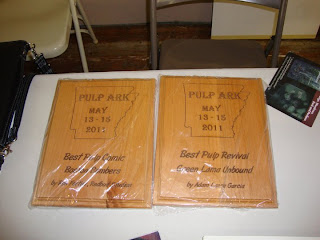 Following that, PULP ARK continued with the presentation of the first annual PULP ARK Awards!  These awards covered ten categories and had been voted on after nominations were taken late last year.  Nine of the awards were voted on by anyone who made a nomination in just one of the nine categories.  The Lifetime Achievement Award was chosen by a hand selected committee of ten, who each made three initial nominations, then the top three of those were voted on to determine the winner.

﻿
﻿ Several awards were accepted by their winners, others by proxies.

BEST BOOK-Gregg Taylor for TALES OF THE RED PANDA: THE ANDROID ASSASSINS

BEST COVER-Anthony Perkins for TALES OF THE RED PANDA: THE ANDROID ASSASSINS

BEST SHORT STORY-Phil Bledsoe for THE MOUNTAIN GOATS OF MADNESS

Following the award, the first annual PULP ARK Art Auction was held.  Three artists contributed pieces-Rob Davis of Airship 27 and Pete Cooper and Dalton Carpenter of Pro Se Productions.  Although the bidding was quick, there were a few heated wars amongst fans for some of the available pieces, but everyone enjoyed themselves and it must be noted 80% of the proceeds went back to the artist!  This will be an event that will continue at PULP ARK!

A major announcement, or actuall revelation was made during the Awards and Auction.   The mysterious masked lady that had been seen frequently since Pulp Ark started, at one point in her standard striped shirt, suspenders, skirt, and fedora and at another in a rather stylish cowgirl outfit, was on hand to give out the awards.  Her identity was revealed by Tommy Hancock to be that of THE PULPTRESS!  Hancock explained that this Pulp Heroine for the 21st Century would be promoting Pro Se Productions but equally as important would be the spokesmodel for the New Pulp Movement as well.  The applause and pictures being snapped around the room signalled that this announcement was a positive one.  The Pulptress, still shrouded in mystery, was very pleased to be a part of all the activity and vowed to promote New Pulp along with her never ending battle against Evil. You can now join The Pulptress's page on Facebook!  Just search for The Pulptress and she'll be there!

﻿﻿
﻿﻿ After the Convention wrapped up for the evening, most of the participants once more gathered in the Comfort Suites conference room for an impromptu New Pulp meeting.  The results of this conversation are still being developed and will be announced soon!
Posted by All Pulp at 12:18 PM