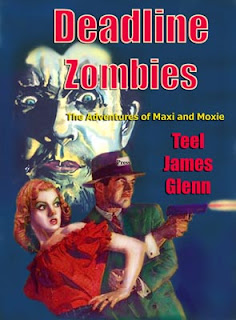 A good Pulp story must contain several things.  First, it has to have engaging, likable characters, doesn't matter if they're white hats or black, they just have to be characters that grab the reader and don't let go.  It also has to have a pacing that is both relentless and encouraging at the same time, breakneck quick but rousing and rushing enoug to make you want to hang on for the ride.  It doesn't hurt for there to be fantastic plot elements, twists and turns that keep the reader interested and guessing.  Also, a decent pinch of weirdness along with snappy, witty dialogue also add quite bit of Pulp to tale.  Yeah, a Pulp rock 'em sock 'em tale of derring do must include those things.

'DEADLINE ZOMBIES' is a collection of New Pulp stories by Glenn that center on the adventures of newspaperman Moxie Dononvan and his actress girlfriend, later wife, Maxi.  The title is slightly misleading due to the fact that although zombies do make an appearance within the book, all five stories do not relate to the undead.  Oh, no, Glenn sprinkles all sorts of oddity throughout the book, including living puppets, little people of the Irish variety, mad alchemists, beastly beings, and even fantastic starring appearances by historical figures, most notably an excellent portrayal of Bela Lugosi.   Themes of all sorts abound throughout the stories as well, including magic versus modernity and transformations and metamorphosis

The latter point is clear not only in what happens to characters in the stories, but in the central pair of heroes as well.  Moxie is a beat reporter and Maxi a B actress as the first story opens, but by the end of the book both of them have gone through job changes and personal development as well, primarily by marrying one another.   These two characters are definitely cut from the Nick and Nora Charles cloth and they have the witty, sometimes caustic banter back and forth to prove it.  Glenn not only paints vivid characters well, but he captures the nuances of nostalgia within his characters just enough to remind you of someone else you once read about.

Another strong point of the collection is the canvas which Glenn creates.  As fully formed as his characters are, his settings and details of action within the stories is ten times as strong.   Many times I lost myself while reading, feeling as I could be standing on Governor's Island or that I could hear Moxie's wooden leg (This is a great concept handled well by Glenn!) clomping just behind me.  The entire collection of stories open up like a wide door and welcome the reader in, refusing to let same reader out until the ride is over.

The only putting off point about this entire collection had to do with some editing issues.  There were a couple of instances where I was jarred enough that I was shaken out of the flow of the story, but it was not difficult at all to get back into it.   Overall, DEADLINE ZOMBIES is an excellent set of stories written with the sensibility of classic Pulp and Noir while balancing well the layers of description and characterization that constitute what many New Pulp writers are doing today.

FOUR OUT OF FIVE TIPS OF THE HAT-I'll go to the newsstands again and again for more Moxie and Maxi. Guaranteed.  Copyboy!
Posted by All Pulp at 1:41 PM