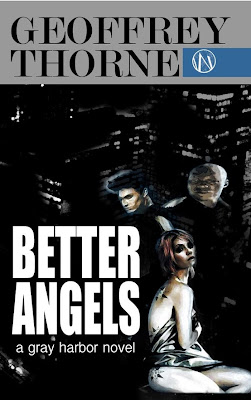 Author Geoffrey Thorne has released Better Angels, a Gray Harbor Novel as an ebook. Better Angels is currently available on mashwords in mulitple ebook formats and on Amazon in both ebook and paperback formats. iTunes and other retail locations are coming soon.

About Better Angels:
A fugitive comes home to settle old scores and gets caught in the schemes of some grifters out to rip off the local mob boss.

It was supposed to be so simple: just scam the local Russian mobster out of some money and drugs, then skip out of town before he knows he's been fleeced. It looked good on paper. It sounded good when he talked it out but, as usual with Nicky, the minute he brought his dream grift into the real world things went straight to hell. His partner seems to have pulled a double cross, his girlfriend is totally useless, the Russians are coming for their property and all Nicky's got to get himself out of this are his wits and his mouth. And that's before Max showed up with his hard guy attitude and quick fists. Yeah, things are going to Hell, all right. Seems like Nicky forgot the first rule of survival on the mean streets of GRAY HARBOR: Always make sure the guy holding the gun is you.

Geoffrey Thorne is currently a writer-producer on the hit TV series, LEVERAGE as well as having written for LAW & ORDER: CRIMINAL INTENT, BEN 10: ULTIMATE ALIEN and the upcoming BEN 10; OMNIVERSE. His work has been nominated for GLYPH and GENESIS awards and he was a multiple silver medalist in the STRANGE NEW WORLDS short story contests as well as a finalist in the prestigious WRITERS OF THE FUTURE AWARD. Thorne is the co-founder and writing partner of GENRE 19, a studio he formed with visual artist Todd Harris in 2008 and the founder and EIC of THE WINTERMAN PROJECT. Learn more about him at www.geoffreythorne.com.

Posted by BobbyNash at 7:52 AM