ALL PULP REVIEWS-Reviews by Ron Fortier 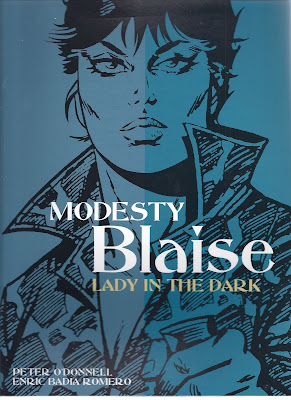 One of the great pulp heroes of all time was the comic strip character Modesty Blaise created by writer Peter O’Donnell with artist Jim Holdaway for the British newspapers back in 1963.  It was remarkable when one considers she arrived on the scene when most newspaper action strips were dying out.  After Holdaway left the strip, several new artists took over to include Enric Badia Romero featured in this volume.  Over the years Modesty & Willie appeared in several movies and series of 13 novels and short story collections.

Now Titan Books is collecting these daily strips in large, handsome packages each containing three complete storylines; all of which are filled with humor, suspense, mystery and tons of explosive action; all traits that have become synonymous with the deadly brunette lovely.

This volume starts with “The Girl from the Future,” wherein Modesty and her loyal sidekick Willie Garvin come to the aid of their American friend, Paul Gant.  Gant, a rich tycoon, has been asked to construct two massive spheres of gold valued at millions of dollars.  His customer is an eccentric sci-fi publisher who believes he has been visited by a beautiful young woman from the future.  Of course both Modesty and Willie know the so-called time traveler is working some kind of scam.  Their challenge is to unravel the con and expose the conspirators before innocent people get hurt.

In “The Big Mole,” Modesty and Blaise are on holiday when they learn a group of terrorists known as the Paladins are holding a dozen nurses hostages in a nearby country retreat where they have fled with their prize, a wounded espionage agent working for a foreign government.  Hiding out in the retreat, the Paladins have orders to kill the spy rather than let him be recaptured by the British S.A.S.  Thus a double dilemma is posed; how to attack the facility, rescue the nurses while somehow preventing the spy from being assassinated at the same time.  It seems an impossible task until Modesty learns that an historical military reenactment between the Cavaliers and Roundheads is scheduled for that same area.  Can she and Willie adapt the old Trojan Horse gambit in a new, modern twist and save the day?

It all wraps with “Lady in the Dark.”  Dinah, a blind woman and close friend of Modesty and Willie, possesses a remarkable dowsing gift which allows her to find underground water sources and mineral deposits.  No one is surprised when she is hired by the widow of European count to help find a century’s old Roman treasure worth millions said to be hidden in an underground cave on her estate.  When Dinah’s husband, Steve, injures his back, Willie offers to accompany her on the assignment leaving Modesty to nursemaid Steve back to health in England.  But no sooner are Dinah and Willie settled into the old castle then the ever suspicious Garvin discovers they have been duped by Salamander Four, a secret criminal organization.  They are holding the true countess prisoner, having replaced her with one of their own agents, and want the Roman treasure for themselves.  Can Willie foil their plot while at the same time protect a blind girl and innocent countess?  Or can he somehow get word back to Modesty in time for her to fly to the rescue?  “Lady in the Dark” is a typical Modesty Blaise adventure that zips like hot lead and never misses its target.

We applaud Titan Books for this beautiful designed and packaged collection in their efforts to preserve one of the greatest newspaper action strips of all time.  Modesty fans should be thrilled at the opportunity to collect the entire run at such an affordable price in such gorgeous, easy to read books.  As for those of you who have never met the lovely and dangerous Ms. Blaise, we can’t think of a better way for you to do so.