WELCOME TO HARD TIMES
Airship 27 Productions proudly announces the release of their 16th and final title of the year; PROHIBITION by Terrence McCauley. 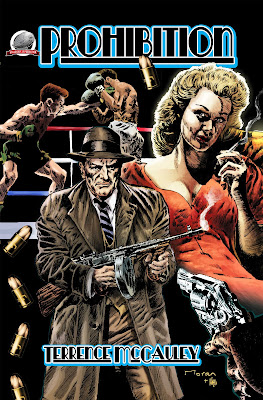 The year is 1930 and New York is a city on the edge. The Roaring '20s ended with the Stock Market Crash and the Great Depression is only beginning. Banks are failing. Companies are closing their doors. Breadlines grow longer by the day. The only market making money is the black market: racketeering, rum running, and speakeasies.  But when even those vices begin to weaken, the most powerful gangster on the Eastern Seaboard, Archie Doyle, sees the writing on the wall. He launches a bold scheme that, if successful, will secure his empire’s future beyond Prohibition. Beyond even the Great Depression.

But when a mysterious rival attempts to kill Doyle’s right hand man, a dangerous turf war begins to brew. With his empire under attack, Doyle turns to his best gun, former boxer Terry Quinn, for answers. Quinn must use his brains as well as his brawn to uncover who is behind the violence and why before Doyle’s empire comes crashing down.

New York based writer Terrence McCauley whips up a fast paced pulp thriller ripe with Tommy-gun blasting hoods, corrupt cops and deadly dames in this original novel reminiscent of the classic gangster movies of old.  “This is pure, unadulterated gangster pulp,” cheers Airship 27 Managing Editor Ron Fortier.  “When I first read it, I immediately found myself thinking of all those great black and white Warner Brother film classics starring Edward G.Robinson, James Cagney, Humprhey Bogart and George Raft. McCauley captures the feel and atmosphere of those rambunctious outlaw days when the mobs were battling each other for control of the Big Apple.”

Beautifully illustrated by Rob Moran who also provides the cover as colored by Shannon Hall with designs by Rob Davis, PROHIBITION is a tough-guy blow to the literary gut readers will not soon forget.

AIRSHIP 27 PRODUCTIONS – Pulp Fiction for a New Generation!
Now available at Create Space – (https://www.createspace.com/4098079)
A $3 PDF edition is available at – (http://robmdavis.com/Airship27Hangar/index.airshipHangar.html)
Within a week it will be on-sale at Amazon proper and in two weeks at (www.IndyPlanet.com)