FORTIER TAKES ON SEDUCTION OF THE INNOCENT-COLLINS STYLE! 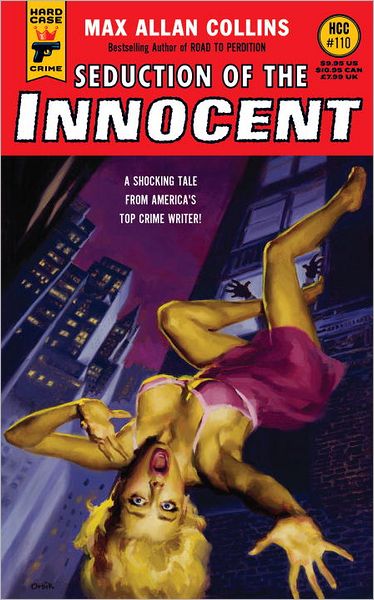 What better book to review following our look at a Modesty Blaise strip collection then one that uses the 1950s anti-comic book witch hunt as its thinly disguised narrative skeleton.  “Seduction of the Innocent,” is the third in a series starring former stripper and newspaper syndicate owner, Maggie Starr and her World War II veteran stepson, Jack Starr.  Both appeared in two earlier comics themed mysteries, “A Killing in Comics,” 2007 and “Strip for Murder,” 2008.  Now Collins wraps up the trilogy with a look at the events that nearly destroyed the American comics industry via the publication of the original, “Seduction of the Innocent,” by Dr. Fredric Wertham.

For the uninitiated, Wertham (March 20,1895 – November 18, 1981) was a German born American psychiatrist who made a name for himself by denouncing comics books as a corrupting influence on the children of that era.  Targeting such publishers as E.C. Comics, he posited the theory that the crime, sex and violence depicted in those comics were the principle cause of delinquency among juvenile boys.  Of course he failed to point out that the titles he singled out were clearly intended for an adult audience though no such labeling existed at the time.  His best known book was “Seduction of the Innocent,” and his criticisms of comic books launched a U.S. Congressional inquiry into the industry and the creation of the Comics Code.

Of course the book is a sham using only the most gruesome examples of graphic art to prove a theory that was never corroborated with traditional scientific sampling.  But the public, already molded by McCarthyism was only too eager to start comic book burning events in their noble defense of America’s naïve youth.

Author Collins has no difficult task in imagining a scenario in which the hated fictional doctor is murdered and then he lines up a half dozen very plausible suspects, each based loosely on past comic industry personalities from publishers to writers and artists.  And therein lies the fun of this tale for any diehard comic book fan; guessing who it is Collins is rifting off of as Jack Starr investigates.  As ever, Collins plays fair and the clues are laid out within the context of the story for all to see and interpret, mystery fans; the challenge being can we solve it before Jack and Maggie do?

This new “Seduction of the Innocent,” is by far a whole lot more entertaining than its predecessors and has the distinction of being Hard Case Crime’s first ever illustrated novel.  Through out the book there are wonderful spot illustrations provided by the super talented Terry Beatty; all done in the marvelous retro golden age style of art.  They add a really nice visual element to what is already a fun read.  It is hoped that Collins’ legion of fans will demand yet more of these delicious murder mysteries starring Maggie & Jack Starr.  In a literary environment overly saturated with dark, somber and depressing cautionary tales these are truly a breath of fresh air.