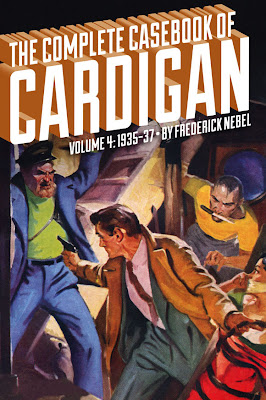 Frederick Nebel's unforgettable character Jack Cardigan was one of the main reasons behind the success of the legendary Dime Detective Magazine. His hard-boiled P.I. stories were a major influence to other writers of the era, yet only a handful have been reprinted since their original 44-story run eighty years ago. Volume 4 of this series contains the last 11 installments, complete and uncut, with the original illustrations by John Fleming Gould.

Learn more about The Complete Casebook of Cardigan, Volume 4: 1935-37 here.

Posted by BobbyNash at 7:00 AM