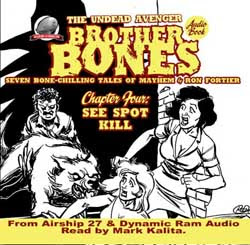 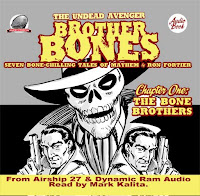 “Voice actor Mark Kalita totally puts his Master Storyteller hat on this time,” Airship 27 Managing Editor Ron Fortier praised. “This is one of those tales that lends itself to a dark rainy night with folks gathered around the family radio to share the chills.” 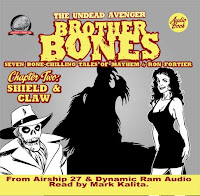 “Dynamic Ram Audio’s Sound Engineer, Chris Barnes, loaded the forty minute recording with lots more sound effects this time around,” added Fortier. These elements add so much creepiness to the entire listening experience, I know our fans are going to love this.”

Airship 27 Production is selling each of the original stories individually for $2 each as mp3 downloads from their website. After all seven have been produced and released individually, the entire book audio package will go on sale for $9.99, a $4 savings.

Art Director Rob Davis has provided cover images from the illustrations he drew for each story. SEE SPOT KILL is an audio pulp written by Ron Fortier and read by Mark Kalita is now on sale and is the perfect “treat” for this Halloween season. 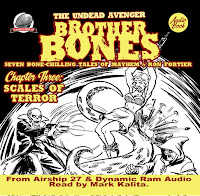 A brand new edition of the book is available on Create Space, Amazon, Indy Planet and Kindle.

Posted by BobbyNash at 6:00 AM