Pro Se Productions announces today that while still putting the Monthly Into Pulp as it has since publishing its first work in August 2010, it now makes its extensive library available in E-book format!  Leading off with veteran Pulp Author Barry Reese's THE ADVENTURES OF LAZARUS GRAY, Pro Se plans to not only make its current catalog available in coming weeks and months via the Kindle, Nook, and in other digital formats, but it also intends to make its upcoming 2012 calendar available via ebook as well.

"Yes," Tommy Hancock, Partner in and Editor in Chief of Pro Se Press reports, "This process has taken a while and there's a few reasons for that.  We originally offered PDFs of our titles and those actually were quite successful, but the requests for Kindle, Nook, and more versions digitally have poured in since day one.  Our biggest hold up was having the staff to produce quality e-books.  We now have that in the person of Russ Anderson, a Pulp author and a vital part of Pulpwork Press as well.  Russ is already at work converting our current books into digital formats, hoping to complete at least one a week for the foreseeable future." 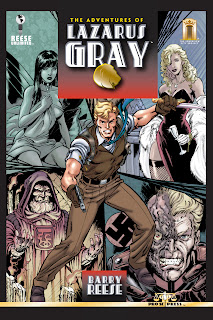 THE ADVENTURES OF LAZARUS GRAY, the first book entry into Pro Se's Sovereign City Project features a hero who awakens on the city's shores with no idea who he is.  Taking the name Lazarus Gray, he forms a team of adventurers to battle the crime, corruption, and evil rampant in Sovereign City.  And its now available for the Kindle here at Amazon and in a variety of formats here at Smashwords!  Hancock states that it will be available from Barnes and Noble for the Nook within the week!

Stay tuned for further announcements as Pro Se enters the digital age with E-Books-Pulp Style!
Posted by All Pulp at 5:03 PM