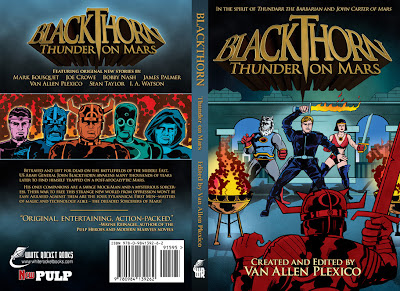 (December 3, 2011)  White Rocket Books proudly announces the release in trade paperback format of BLACKTHORN: THUNDER ON MARS, a science fiction action-adventure anthology set on far-future post-apocalyptic Mars.
Created by Van Allen Plexico (Sentinels, Lucian), the book features stories by New Pulp luminaries Mark Bousquet, Joe Crowe, Bobby Nash, James Palmer, Sean Taylor, I. A. Watson, and Plexico, along with six full-page illustrations by Chris Kohler (Sentinels).  Cover art and design are by James Burns (Lance Star: One Shot).
In the spirit of “Thundarr the Barbarian” and “John Carter of Mars” comes the gripping saga of US General John Blackthorn.  Betrayed and left for dead on the battlefield, Blackthorn awakens many thousands of years later to find himself trapped amidst the ruins of a post-apocalyptic Mars, his only companions a savage Mock-Man and a mysterious sorceress.  They battle together to free this strange new world from oppression, but it won’t be easy, for arrayed against them are the deadliest foes imaginable: mutants, monsters, and robots, as well as treacherous teammates.  And lurking behind it all are the fanatical forces of the First Men:  the Black Sorcerer, the Sorcerer of Fatal Laughter, Lord Ruin, and the Sorcerer of Night—masters of magic and technology alike—the dreaded Sorcerers of Mars!
“The awesome array of talent assembled on this book really speaks for itself, and guarantees a fun time will be had by all,” promises Editor Van Allen Plexico.  “Each of the writers jumped on the project with huge enthusiasm and each brought something unique and very exciting to the table.  And there’s no question Chris Kohler, who is also interior artist on my Sentinels superhero novels, has done some of the best work of his career here with BLACKTHORN.”
Says noted New Pulp author Wayne Reinagel, “BLACKTHORN is one of the best sword-and-sorcery spaceman anthologies to arrive on Earth, or Mars, in the last century or more.  Clearly inspired by an equal combination of Hanna-Barbera’s ‘Thundarr the Barbarian,’ DC Comics’ ‘Kamandi,’ and Edgar Rice Burroughs’ ‘John Carter of Mars,’ BLACKTHORN is an original, entertaining, action-packed saga.”
The new trade paperback edition follows on the heels of the successful Kindle launch, which immediately zoomed into the top rankings of all SF anthology e-books on Amazon.  It presents all seven stories in their entirety, including the double-length origin, along with Chris Kohler’s interior artwork.
White Rocket Books is a leader in the New Pulp movement, publishing exciting action and adventure novels and anthologies since 2005, in both traditional and electronic formats.   White Rocket books have hit the Amazon.com Top 15-by-Genre and have garnered praise from everyone from Marvel Comics Editor Tom Brevoort to Kirkus Reviews.
On sale as of December 2, 2011, BLACKTHORN: THUNDER ON MARS is a $15.95, 6x9 format trade paperback from White Rocket Books.
232 pages; 6 full-page illustrations
ISBN-10: 0984139265
ISBN-13: 978-0984139262
On Amazon.com:
http://www.amazon.com/Blackthorn-Thunder-Van-Allen-Plexico/dp/0984139265
Posted by All Pulp at 8:40 AM