ALL PULP GUEST REVIEWS-
HORROR IN GOLD
The Newest in The Wild Adventures of Doc Savage
by Will Murray
Coming Soon from Altus Press!
Review by Jim Beard
Amazing Alchemical Adventure
“Horror in Gold” - A Review 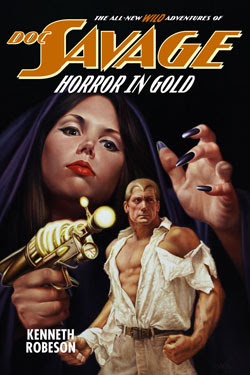 HORROR IN GOLD, the new Doc Savage novel from Will Murray and Altus Press, opens with one of the best Doc first chapters ever. It’s a real humdinger. The rest of the book’s not too bad, either.
Once I really got into the story, that old comforting feeling of visiting with Doc and his amazing aides swept over me. That’s one of the highest compliments that I can pay Murray; it’s like coming home to read one of his modern Doc tales. As many of you well know, it’s almost impossible to divine where Lester Dent ends and Will Murray begins, or vice versa. HORROR IN GOLD is no exception, and I believe it will please even the most discriminating Doc enthusiasts.
When I was give the advance pdf of the book to read, one of the things I hoped lurked within its pages was one of the great super villains of old – and, lo and behold, I got it. Complete with a so-called “infernal device,” the book’s villain is larger-than-life, an improvement on the adversaries who populated THE DESERT DEMONS, Murray’s previous Doc tome.
Special notice should also be given to the author’s use of Long Tom here, not exactly the most popular of the aides; just wait until you check out the specialized use for Long Tom’s false teeth. It sounds goofy on the surface, but its just one of many fun bits that Murray includes. Monk and Ham are, of course, predominant in HORROR IN GOLD and just when I thought I had had just a bit too much of their incessant bickering – Murray almost never lets up on the gas on that score – the two men have one of the very best scenes in the book, an atypical moment that sticks with me long after I finished the story. And you can’t beat Monk being compared to Alley Oop, either.
Doc Savage here is the classic Doc of legend and gets right in to the thick of the troubles almost immediately. I also have to not that the while THE DESERT DEMONS plunked itself down squarely on the west coast, HORROR IN GOLD is very much a New York City adventure and Doc’s fabulous headquarters is put to very good use. It becomes almost a real place through Murray’s many scenes set therein. There’s also a fantastic section with the “go-devil” car, as Monk calls it, and a very, very unfortunate criminal. Top-notch stuff.
One of the things I love most about the original pulps is there use of the language of their times – slang, to be precise. Murray creates a reasonable facsimile of that here, especially with what spills out of Monk’s mouth. One phrase in particular that’s used as an exclamation – “I’ll tell a man!” – fascinates me, as I had never heard it before. And then, of course, there are the archaic spellings, like “to-day” and the book’s illusion of the 1930s is complete.
Alas, Pat Savage has something akin to a brief cameo, but I thoroughly enjoyed Murray’s use of Lea Aster, Monk’s secretary. In fact, after this, I would be very eager to see here again and again in this new Doc era.
Are there any caveats to my enthusiasm for HORROR IN GOLD? Perhaps only that it breaks away a little too abruptly towards the end to a completely new location and characters that don’t populate the bulk of the narrative. But, Will Murray rolls out the pulp action so smoothly and so in line with Lester Dent’s sensibilities that any gripes become minor quibbles when the entire package is looked at as a whole.
In all, HORROR IN GOLD whets my appetite for more – which is a good thing.
Posted by All Pulp at 1:50 PM