HANCOCK TIPS HIS HAT TO THE CABINET OF CURIOSITIES!

Yes, I admit it.  Head hung low, eyes cast down, I have to confess the truth.  Some of you may want to relieve me of my fedora after you hear this.

I only just this past year read a Preston and Child Agent Pendergast book.   To heap horror onto misstep, I didn't start with the first book.  I actually quite literally started in the middle. 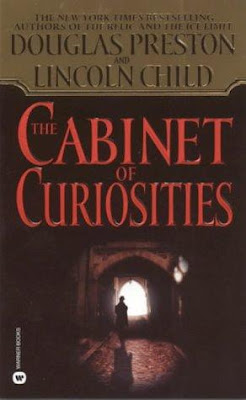 Okay, the hard part and gnashing of teeth aside, let's get to it.  Preston and Child are well known in the New Pulp world, both for their individual work and their combined novels.  By far, their most popular character is that of Agent Pendergast, an FBI agent with more connections than Tootsie has pops and skills that most definitely put one in mind of past Pulp heroes.  First introduced in a less than lead role in RELIC, Pendergast captured public imagination so strongly that he moved into the first position in following novels, which are now in the double digits as far as how many there are.

Many people recognize the Pulpiness of Pendergast, comparing him to The Shadow in several instances.  Although that similarity is apparent to me, I don't know that I actually see him as more one archetype than the other when you talk Pulp Heroes.  But regardless if you think he's walking in Lamont Cranston's footsteps or not, make no doubt about it.  Pendergast is one of the best representations of a New Pulp hero available to the reading public today.

In CABINET, an archaeological discovery is made in New York City, a discovery that reveals murders done in the name of perverted science over 100 years before.   A museum archaeologist and her newspaper reporter boyfriend, one who apparently has a past history with Pendergast, end up thrown into the middle of this mystery with the elusive, secretive agent.  What mystery?  Well, it's two fold really-What happened in the late 1800s that caused so many people to be murdered, then hidden away underground?  And who is mimicking those murders all over again to nearly the exactest detail in the modern era?

There's so much and really just a little to say about this book.  The plot is tight, well paced, enough twists and turns to keep anyone intrigued and at the same time so well handled that no one gets lost.   The characters pop off the page, Pendergast and everyone else.  The dialogue is crisp and reads as if it was being heard.  The reality of the relationships amongst the characters is stark and strong, particularly breathing life into one particular policeman that, when he interacts with Pendergast especially, comes fully alive.

THE CABINET OF CURIOSITIES has no slow points, does not lag, and is replete with three dimensional characters, down to the least used of them all.  No cardboard characterization was used in the making of this manuscript.    The climax, the part of the book where most of this genre fail if they're going to, is riveting and completely creepy.

I came late to Agent Pendergast, it's true.   But now that I'm here, I'm along for the ride from here on out.