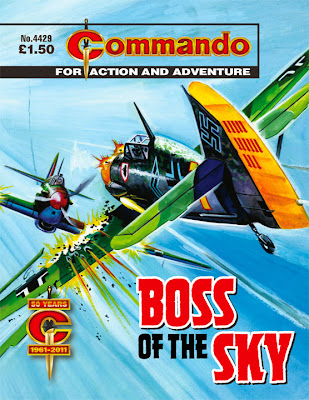 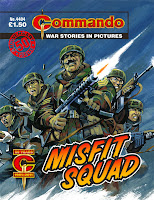 Britain’s favourite war comic, Commando, reached a major milestone in June 2011 when it celebrated the 50th anniversary of its first publication on 27th June 1961. Part of the Dundee-based DC Thomson & Co. Ltd stable of comics and magazines, Commando publishes 4 stories every fortnight — 2 new and 2 re-issued classic stories — and maintains its place as the home of comic action and adventure.Although it retains the classic illustrated cover and the iconic black and white comic artwork which has made it so beloved of the UK public, Commando has moved with the times over its 50 years and the stories contained within its pages now span a range of conflicts, right up to the first Gulf War in the early 1990s. Commando’s current editor, Calum Laird, who took over in 2007 said, "As someone who read Commando in the 60s and 70s, worked on the title as a junior member of staff in the 80s and 90s, and became editor in the 2000s, sitting in the hot seat for the 50th birthday is a great honour. Not everyone can have my career path but if Commando can entertain others as well as it did me, I’ll be very happy indeed!"

Visitors to the website (www.commandocomics.com) can also get their hands on some famous Commando cover posters (in A1 size format), exclusively, for the introductory price of £19.99. This September will also see a brand new collaboration for Commando, with the launch of the "Draw Your Weapons" exhibition – celebrating the iconic artwork from 50 years of the comic - at the National Army Museum in London. The exhibition will open on 1st September and Calum commented, "Everyone is delighted that this major exhibition of Commando artwork is to be hosted by the National Army Museum, as one of the key activities of our 50th anniversary celebrations. We’re sure that fans of Commando old and new, will revel in this display of comic art at its best, exhibited so dynamically by the National Army Museum. 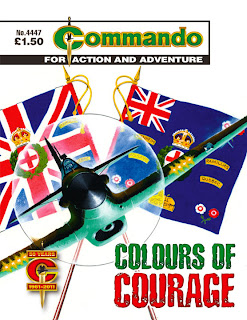 Commando No 4447 Colours Of Courage
The proudest possessions of any regiment are its colours — the flags which it carries into battle. Its history is recorded on these colours, the victories it has won.
A regiment guards its colours fiercely. To have them captured by the enemy is a terrible thing. But when a man hands over the colours to save his own skin it is a disgrace that brave soldiers can hardly bear think about.

If there are two things difficult to get right in a Commando they are French Resistance stories and ghosts. Resistance stories could easily be 63 pages of skulking about avoiding searching German soldiers and ghosts could easily look like normal characters drawn without enough ink.
Thanks to ace story-teller Cyril Walker, Colours Of Courage cracks along with plenty of action to break up the tension. And Arthur Fleming — an art teacher from Glasgow — manages to skilfully depict a glowing figure despite only having black ink and white paper to work with.
Wrapped in one of Ian Kennedy’s superbly drawn and laid-out covers it’s got all it needs for a cracking Commando. 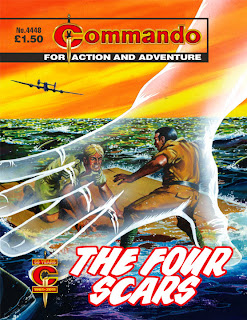 Commando No 4448
The Four Scars

Corporal Bill Kirk felt the tiny life-raft rock lazily as the Jap struggled aboard. Both turned to look at the sinking Jap prison-ship they’d been on — Bill a prisoner, the Jap a guard. Then they turned back, to look at each other; and what that Jap read in Bill Kirk’s eyes made him start back in fear.
But there was no escape for him. With only the vast empty ocean and the sharks circling the raft for witnesses, they grappled in a fight to the finish.

I’ve mentioned before that I my childhood Commando issues at the back of the garage a few years ago. Some I had to look at again to refresh my memory, but not this one. I don’t know how many times I read and re-read this in the 60s but it must have been a lot because I had almost total recall.
Ken Barr’s cover with its ethereal hand hovering over the action, Victor de la Fuente’s action-packed, high-energy inside art and Eric Hebden’s crackerjack of a story with its startling twist were just what the doctor ordered in 1965…and are equally so today. I think so anyway and I hope you’ll agree.
As an aside, Ken Barr used a sheet of transparent plastic sheet with the outline of the hand painted on it to get that ghostly effect. I certainly didn’t know that in 1965. 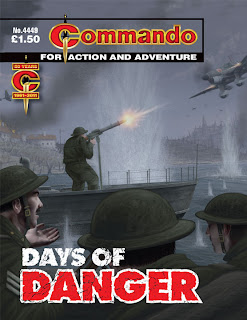 Simon Katz was a young German and a fervent anti-Nazi. A brilliant mathematician, he escaped Germany by the skin of his teeth and went to work as a code-breaker for the British.
Not long after, Sergeant Barney Taft also made an escape – from the bullet-strafed beaches of Dunkirk.
Though they were on the same side, when circumstances threw the pair together, they clashed bitterly. But could they manage to work together against a ruthless enemy? They would have to if they were to survive. 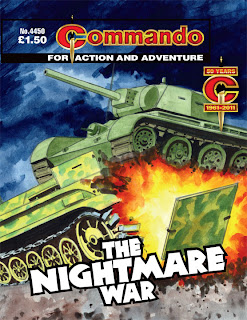 Commando No 4450
The Nightmare War

Private Franz Bauer, a German Army engineer wounded during the invasion of France, was haunted by the deaths of his comrades in the same battle — wiped out by a mine. When he recovered he threw himself into his new job developing the remote-controlled Borgward IV demolition vehicle, hoping it might save other German lives.
His chance to save thousands of lives would come, but he would be working alongside an unlikely ally — someone who had nightmares every bit as bad as Franz’s.