This year, Jay Piscopo and his company Nemo Publishing have released yet another COMMANDER XMAS SPECIAL featuring great takes on Piscopo's character by various writers and artists!  Also in this issue, a new comic and character is introduced by well known Comics Veteran Brian Augustyn!   Read on about Brian's great new pulp character, MR. GABRIEL! 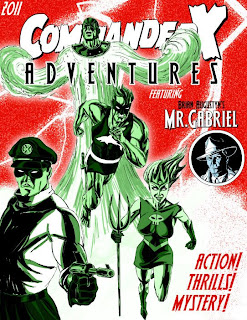 ALL PULP: First, thanks for joining All Pulp today, Brian.  Share a little about yourself, both professionally and personally.
BRIAN AUGUSTYN: Thanks for having me. Let's see, I was born in Chicago, where I grew up and caught the comics bug in the 1960s.   Never lost the bug, either. Discovered mystery and science-fiction paperbacks too--and grew up a full media fanatic.  I did a bit of the fanzine scene, and so on, did my own crude comics, and experimented with story and story telling.
In the 80s I was part of the independent comics boom (following the Teenage Mutant Ninja Turtles), working friends Paul Fricke and Scott Baederstadt on a book called Trollords. Had a lot of fun there and that led me to DC in 1987, where I worked as
an editor for almost ten years. Edited Flash, Wonder Woman, The Justice League franchise and a lot more. Started writing for them too, eventually producing "Gotham By Gaslight, the first of what DC began calling "Elseworlds," alternative takes on the major heroes--finding, hopefully, fresh perspectives and fun comics.
I went freelance in 96 and have written, Flash, JLA Year One (both with Mark Waid), and Crimson, and Out There, both with Humberto Ramos for Wildstorm/Cliffhanger.
I've written several hundred comics, some YA novels, story books, game scenarios and mortgage checks since then.
I'm married, have two almost grown daughters and live in Arizona at the moment.
AP:  You're involved in the Commander Xmas online book that Nemo Publishing and
Jay Piscopo are known for around this time every year.   You're introducing an original character.  Tell us about Mr. Gabriel.  Who is he, what's his mission/purpose, etc.?
BA: Mr. Gabriel might be a supernatural/celestial being, though he seems to be human in every way. Let's just say that he gets things done and saves people in mysterious ways. His mission is to help those in need or distress. In my mind, he shows up when most needed--though how he knows is part of his mystery. He's known in New York, so people in trouble do seek him out, including the NYPD. Gabriel does not carry a gun, and probably won't engage in fisticuffs very often, but is capable, diligent, and pretty unstoppable when he starts work. He's a tall, solid, handsome guy in a Mitchum-esque
way, and favors white suits, fedoras and trench coats. 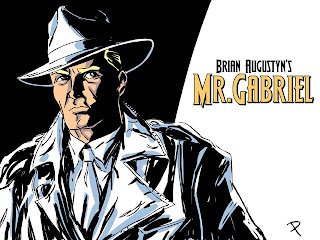 AP:   And the story he appears in in the Xmas special, what can you share about that?
BA: It's Christmas Eve 1935, a young couple is visiting NYC and are mysteriously attacked. The husband is shot, the wife goes missing and an enormous blizzard shuts the city down. The clock is ticking because the woman is pregnant, due to deliver at any moment, and the plummeting temps and blinding snow put her and the baby in terrific danger. But, Mr. Gabriel is on the case and has a soft spot for baby's born on Christmas.
AP:   What appeals to you about the pulp type characters?  Mr. Gabriel is obviously in that camp, but what about that sort of story appeals to you as both a writer and a fan?
BA:  In general, I have been a fan of pulp style fiction since discovering the paperback reprints of Doc Savage in the 60s. I love genre fiction, from detective stories, space opera sci-fi, even westerns. I like high action stories with large, colorful characters. Obviously, that's what I've done for 30 years in comics, and now I'm happily stretching my prose muscles. Some of the most popular modern genre fiction from Dan Brown's DaVinci Code novels, to Lee Child's Reacher series, Preston & Child's Pendergast novels, and so on and on, prove that fan interest in this kind of material is high.
AP:   Christmas stories are interesting creatures, every genre has one.  What about a Pulp Christmas story you think  makes it stand out from other Christmas stories? 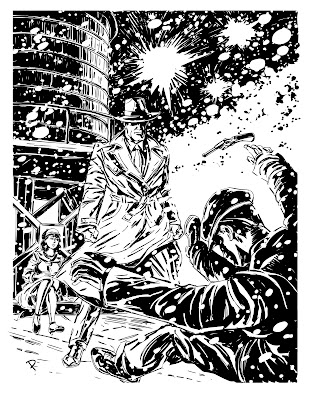 BA: Good question. I think Christmas stories are sentimental by necessity and pulp-style writing allows free reign to writing emotion that more "serious" fiction might avoid. I want the reader to be thrilled, wowed and maybe choke up a little even.
AP:   Why would a modern audience want to read Mr. Gabriel?  What appeal does a
character set in the past have for readers today?
BA: Nostalgia for a simpler time? Fondness for potboiler thrillers? A search for heroes? A good way to escape into a fun place for a while?
Probably all of the above and much more. I promise that reader a thoughtful, caring and resilient hero solving problems with wit, determination and maybe some magic.
AP:   What are the future plans for Mr. Gabriel?  Any other Pulpy projects you're working on?
BA:  I have plotted a Mr. Gabriel novel, which I plan to start writing soon. The amazing Jay Piscopo has been very encouraging and supportive in pointing me in this direction. It's like I'm rediscovering my craft all over again.
I want to start writing a lot more prose (genre) fiction, so I'm also planning some stories with other heroes and settings as well. Not sure where I'll place any of that, but I am excited to write them all the same.
AP:  Brian, thanks so much for your time!  Merry Christmas!
BA:  Thank you Tommy. Hope you enjoy the special. Merry Christmas!
Posted by All Pulp at 2:37 PM