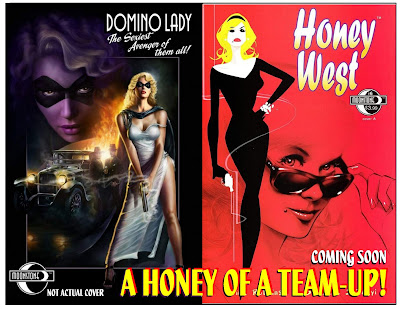 Rob Wyatt is making a run for the Governor’s Mansion and Ellen Patrick , The Domino Lady, is doing everything in her power to keep him out of it. She knows that he is involved with organized crime, but finding proof of it has proven difficult.

Wyatt’s opponent is Douglas Hart. For all intents and purposes, he seems like the perfect candidate, if not a tad bit young for the job. Ellen throws her support behind Hart’s campaign, among other things. She finds Hart very attractive and starts up a hot and steamy romance. Could the Domino Lady finally have found a man to tame her?

Probably not. By night she continues her efforts to thwart Wyatt’s run for the Governor’s Mansion, which has brought he to the attention of the politician’s backers, the mob. They call in The Cleaner to put out a hit on both the Domino Lady and Douglas Hart.

Can Domino Lady stop Rob Wyatt and those backing him before it’s too late?

I will be writing a new novel that teams up famed private detective from TV and novels, HONEY WEST with the DOMINO LADY in a brand new thriller. The novel is still in the early plotting stages, but I’m having a blast looking ahead to Ellen Patrick’s future as an older Domino Lady continues her mission against corruption in the 1960s. As much fun as writing Domino Lady again has been, I’m over the Moon at the chance to write Honey West, a character I enjoyed in the short-lived television series starring the late Anne Francis.

Honey West will be the second character from television I’ve had the opportunity to write after two turns writing the adventures of the Green Hornet and Kato. It’s going to be fun.

Coming later in the year will be my novel, Fight Card: “Barefoot Bones.” Although still in the early stages, the novel will tell the story of the man known as “Barefoot Bones” from his less than stellar beginnings in the deep south where he learned to fight out of necessity. Then came a fateful encounter with Father Tim at St. Vincent's in Chicago taught him the sweet science of boxing. And from there to a battlefield in Korea where the stakes had never been higher. The one constant in Bones’ life has been fighting. Lucky for him, he’s good at it.

Keep watching www.bobbynash.com and All Pulp for more details on these projects as they become available.

Posted by BobbyNash at 1:00 PM