Lots of news to cover, so I’m going to get right down to it.  Our January offering Fight Card: Rumble in the Jungle from David Foster got 2013 off to a great start for us.  This is David’s second Fight Card novel (after Fight Card: King Of The Outback) and he really blows the pulp doors off in this tale ... 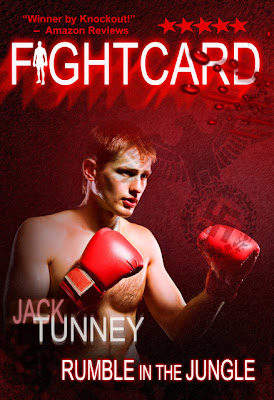 Fight Card: Rumble in the Jungle

Brendan O’Toole is on a downward slide. When his wife dies in a freak car accident, he quits his job and hits the bottle hard. Half tanked in the ring, he allows himself to be knocked out, ending his boxing career.

O’Toole, hits rock bottom. After a night of boozing, he is brutally mugged and left for dead. But O’Toole has friends, even if he can’t see it. One of them is Danny Reilly, a barman with a heart of gold. He arranges for O’Toole to join a construction crew set to work on a hotel being built in the Central African jungle nation of Sezanda. It’s O’Toole’s last shot at redemption.

As things begin to look up for O’Toole, the Sezandan government is overthrown in a military coup. All foreigners are taken prisoner and locked in concentration camps. O’Toole is sent to the worst, HELL CAMP XXI, under the control of a brutal ex-Nazi, Kommandant Krieger. Krieger has a special way of keeping his prisoners under control. In the camp, he has erected a boxing ring. And anyone who steps out of line is forced to face off against his man-mountain, wrecking machine, Crator – a man whose sole purpose is to inflict pain.

Fate has destined Brendan O’Toole to don the gloves one more time, in a fight not just for his life, but his very soul.

Attached you will find complimentary Word file of Fight Card: Rumble In The Jungle to send on to your Kindle or read on your computer, as well as a jpeg of the cover.

You can find Fight Card: Rumble In The Jungle on Amazon.

Next up is our February release, Fight Card: Against The Ropes from acclaimed New Pulp author Terrence P. McCauley.  In December, Terrence saw his novel Prohibition – featuring Terry Quinn, ex-boxer turned mob enforcer in 1920’s New York – released from top pulp publisher Airship 27. Prior to the release of Prohibition, Terrence pitched the prequel – telling the tale of Terry Quinn’s boxing years – as a Fight Card novel.  While the 1920’s was new ground for Fight Card, the character and writing was so strong, it was immediately a done deal. Fight Card: Against The Ropes is the result. 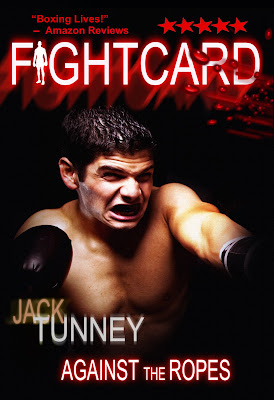 Fight Card: Against The Ropes

The boxing ring was the only world Terry Quinn had ever known. He'd entered the hallowed halls of St. Vincent’s Home for Boys in New York City as a fighter and left as a boxer. Years of training and honing his skills finally paid off as he fought his way to the top. Only one more fight stood between Quinn and shot at the heavyweight championship against Jack Dempsey.  It was the glory he'd been waiting for all his life.

But things have never gone easy for Terry Quinn. As he starts training for the biggest fight of his career, a crew of Tammany thugs and fix-it men tell him to throw the fight or face dire consequences. Even before he has a chance to consider their offer, those dire consequences come home to roost when one of his long time corner men turns up dead.

The identity of the killer isn't in question. The only question is what is Terry Quinn going to do about it.

Against The Ropes is a tough New York tale played out while the Roaring Twenties roared their loudest. Crooked cops, Tammany hacks, has-beens, and even the great Jack Johnson, all play a role in Quinn’s decision – is his quest for justice worth his future, and possibly ... his life.

You will also find attached complimentary Word file of Fight Card: Against The Ropes to send on to your Kindle or read on your computer, as well as a jpeg of the cover.

You can find Fight Card: Against The Ropes on Amazon.

In other news, our March release will be Fight Card: The Last Round Of Archie Mannis from Joseph Grant.  This will be a different style of Fight Card novel, echoing the biographical pieces done by the great Jack Kofed in many of the sports pulps.

April will see a Fight Card triple combination debut at the 2013 Pulp Ark convention where Fight Card co-creator Paul Bishop (yeah, me) will be the guest of honor.  Pulp Ark will herald the unveiling of the first two novels under the Fight Card MMA banner – Fight Card MMA: Welcome To The Octagon from Gerard Brennan, and Fight Card MMA: The Kalamazoo Kid from Jeremy Brown.  Both Gerard and Jeremy sport extensive critical acclaim for their prior works and have delivered dynamite stories that leap off the page.

The third punch of the combination will be Fight Card: Swamp Walloper –
the sequel to Fight Card: Felony Fists – from yours truly, Paul Bishop.  Fight Card: Swamp Walloper will send LAPD cop Pat Flynn and his partner Cornel Tombstone Jones deep into the Louisiana swamps on a mission of two-fisted vengeance – and it won’t take long before they are in the fight of their lives against a sadistic prison warden and a chain gang of swamp rats.

As always, artist Keith Birdsong has been doing yeoman work on the covers for our e-books, and David Foster has been very generous in helping to get out our top-notch paperback covers.

Thanks to Terrence P. McCauley for taking over the Fight Card Twitter feed @FightCardPulps, to Robert Evans for keeping up the Fight Card Linked-In Group, and to Jeremy Brown for helping out with the Fight Card website.

With the able assistance of David Foster, a new issue of Fight Fictioneers Magazine will also be making an appearance in April and will be promoting all of the Fight Card novels to be published since our last issue.  We are continuing to work on audio versions of our Fight Card titles and hope to have more solid information soon.

Posted by BobbyNash at 8:11 PM