THE LONG MATINEE races along the edge with BLADE RUNNER!


BLADE RUNNER: The Theatrical Version
1982
Warner Bros.
Directed by Ridley Scott
Produced by Michael Deeley
Screenplay by Hampton Fancher and David Peoples
Based on the novel “Do Androids Dream of Electric Sheep” by Philip K. Dick 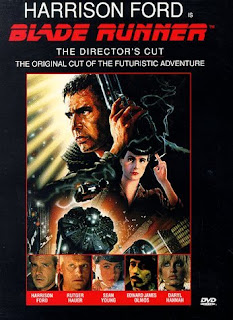 There’s a good reason why BLADE RUNNER is still hailed as a masterpiece of science fiction/neo-noir/detective pulp filmmaking today.  It’s just that good.  This is the movie; along with “Alien” released two years earlier defined the look and feel of science fiction movies for the next thirty years.  BLADE RUNNER is innovative in a lot of ways but most of all in the way it presented the future.  Of course, for us living in 2011 which isn’t so far away from the 2019 depicted in the movie we can get a chuckle at how far off the movie is in predicting where we would be.
But you look at the movie and what pulls you in is how lived in it looks.  This is no sterile “Logan’s Run” future where everything is clean and shiny.  This is a nasty future with dirt, grim, filth, machines that are made to be functional not pretty.  People wear real clothes with wrinkles that need to be washed.  There are billboards everywhere urging you to buy, buy, buy.  The streets are clogged with pedestrians that walk too fast who cuss at cars that honk at pedestrians who walk too slowly.  All the people don’t look pretty. In fact they look bored, worn down, used up, tired.  Kinda like the people you pass everyday on your way to and home from work, right?
Rick Deckard (Harrison Ford) is enjoying his retirement.  Once an honored member of L.A.’s Blade Runner Squad, he got sick of it and quit.  You see, his job was killing.  Killing Replicants.  Genetically engineered humanoids created by The Tyrell Corporation as slave labor for Earth’s off-world colonies.  The Replicants are stronger, faster and smarter than humans.  In fact, The Tyrell Corporation claims that their new Nexus-6 models are “More Human Than Human”.  And maybe they are.  Six of them prove resourceful enough to make it back to Earth and Los Angeles.  Which is where the Blade Runner comes in.
Deckard is pressed back into service by his old boss Bryant (M. Emmett Walsh) and Bryant’s brown-noser Gaff (Edward James Olmos) to hunt down and retire the Nexus-6 Replicants.  It won’t be easy as they’re the most advanced Replicant models.  And they are determined to get to their creator Tyrell (Joe Turkel) and find a way to extend their four-year life span.  Deckard has to navigate through a minefield of humans and Replicants, all with their own agenda and their own plans to discover the truth of what being human means.  At the end of this tangled road is Rachel (Sean Young) a Replicant who believes is human and puts her trust and love in Deckard.  A man who comes to question his own humanity as the line between Human and Replicant becomes more blurred in his relentless pursuit of his quarry.
I love BLADE RUNNER.  That’s the simplest and best way I can put it.  I saw it during its original theatrical run and I love it now.  Mostly because of the way that it looks at the future by looking back.
Let me explain: even though BLADE RUNNER is a movie about the future, there are a lot of throwbacks to the past which make the movie look even more futuristic simply because we haven’t seen stuff like this in movies in a long time.  Rachel’s hair styles and clothing, inspired by Joan Crawford’s look of the 1930’s.  Deckard’s clothing and trenchcoat, inspired by private eyes of the 50’s.  The gritty, noir-ish look of the city with it’s rain-swept streets.   The reto-technology.  And I love the multi-cultural look of the movie which implies that Los Angeles of the future is a Third World culture unto itself.
At the time this movie was made Harrison Ford was #1 at the box office.  And why not?  He was starring in two major movie franchises and he took the BLADE RUNNER job to expand his range.  And I think he pulled it off extremely well.  There’s a real Humphrey Bogart-ish quality to his performance in this one.  The role of Deckard is obviously meant to be a throwback to Sam Spade and Philip Marlowe and it works.  Again, the whole success of this movie lies in the setting and technology reaching to the future while the clothing, attitudes and style of filmmaking reaches to the past.  It an extraordinary melding of past and future that many films have tried to copy but only BLADE RUNNER captured and captured exceedingly well. 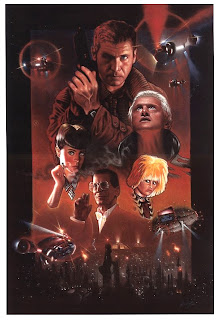 Sean Young quickly got a reputation in Hollywood as being exceeding difficult to work with which I think is a shame.  She’s astoundingly good in this movie and I again point to her Joan Crawford-influenced make-up, wardrobe and style of acting as to why.  Rutgar Hauer steals the movie in terms of acting.  As Roy Batty his final speech has gone down in movie history.  And rightly so.  Few movie characters have died in such a memorable fashion as Roy Batty.
So should you see BLADE RUNNER?  Chances are you already have.  At least one of the several versions available.  There’s a Director’s Cut.  A Final Director’s Cut.  An Ultimate Final Director’s Cut.  An Ultimate Platinum Final Director’s Cut and who knows how many others.  Last I heard there were seven versions available.  My recommendation?  Start with the Theatrical Version so you can see it the way we saw it back in 1982 and then go from there.  But any way you see BLADE RUNNER, but all means see it and enjoy it.
Posted by All Pulp at 6:18 AM