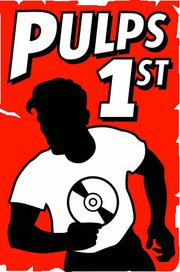 Mark Halegua, noted Pulp Enthusiast and Entrepeneur, debuted a Pulp centric column at the top notch comic and pop culture site, Comics Related!  Mark's column, PULPS﻿ 1st,  opens today with a background history on pulps that long time fans will enjoy and new readers can get just enough out of to make them want to know more!  Mark will cover Pulp with his inimitable style of hardcore fan and a knowledge base of just what Pulp should be in coming columns!  ALL PULP congratulates Mark on his debut and Comics Related for getting the right man for the job!
http://comicrelated.com/news/10971/pulp-1st-debuts
AUTHOR ANNOUNCES NEW DIGITAL NOVEL!!!﻿
From Teel James Glenn- 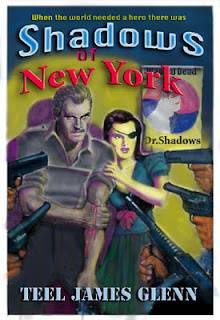 I'm excited to announce the publication of "Shadows of New York" Published by BooksforaBuck.com

In the 1930s, the world stands at the brink of war, Japan is intent on its conquest of China, and criminal masterminds are using the confusion to carve out their own empires. Into this world strides Dr. Shadows.

When his plane was shot down over Korea by the Japanese, Dr. Shadows was nearly killed, being rescued by Korean monks who nursed him back to health with an herbal treatment that turned his skin an ashen gray, but that also gives him a speed and agility unmatched by others. After years of healing and martial arts training, Dr. Shadows is back in New York where he's established the Shadows Foundation for Justice. Through this organization (and with the help of sidekicks Slugger Harris and monk and martial artist Dr. Hoon and perky Lee Han Ku (Hank)) he'll attempt to right wrongs, solve crimes, and defeat crimelords whose greed is spurring the world toward war.

Author Teel James Glenn creates a pulp-fiction hero who would have been at home with the pulp action characters of the 1930s--Doc Savage, Batman, the Shadow, and Secret Agent X, and who would have battled arch-fiends like Fu Manchu. Glenn's New York is not the glamorous stage for theater and the super-rich, but bars, Chinatown, and secret societies.

Fans of pulp fiction will enjoy the name-dropping of mostly-forgotten characters, and the careful reconstruction of an era that is now in the past and perhaps never fully existed.

And as an added incentive the book is only One Dollar for the remainder of March at booksforabuck.com!!!