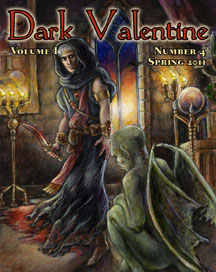 In a culture obsessed with vampires, werewolves, murder mysteries, apocalyptic predictions and in your face violence (these days in the literal sense, with 3D films fast becoming a popular trend), most of us are no longer afraid to admit we enjoy being scared senseless or at least forced to think about the dark, twisted world around us. Stories of such things have been around for thousands of centuries, maybe growing from paranoia because of unexplained illnesses at the time or tales of demons and the fiery pits of hell. The morbid fascination with such tales has been with us from the very start, and has now grown so large that there is no worry of it going up in a puff of smoke any time soon.
So what do we do when films and TV shows just aren't hitting the right notes for us? When they don't branch far enough or stretch the imagination to its full potential? Most turn to fiction, a world without limitations, strict time and explicit guidelines.
Dark Valentine is a literary magazine that releases an issue every season, sticking within the varied category of 'dark fiction'. They accept short stories ranging from the, “Should I be laughing?” black humor to the brain melting slipstream of the conscious mind. If you, like many others around the world, enjoy the darker side of life, you are in for a mighty fine treat! The Spring issue is jam packed full of fantastic stories, all of which couldn't be more different than the previous if they'd tried.
It begins with the fantasy story Swallow the Light, by Kristen Davis. A story that pulls you so deep into its mythological world that when it ends, daylight feels as though it may actually kill you and a thirst for knowledge and blood bubbles in the pit of your stomach. Next up is Tonia Brown's Danny-Boy, a paranormal story set in modern times, written in modern text that if you were in bed would leave you scared and wide awake a lot longer than you'd planned to be, listening carefully for any sort of change in the air. So from the start, although both shares the same dark tone throughout, they are entirely different, therefore both stand firmly on their own two feet. And the rest certainly didn't disappoint.
Those that stood out seemed to be chock full of detail and description, but not so much that you become bored, nodding off with your kindle or IPhone flat on your face. La Fée Verte, A Roman Dalton Investigation, by Paul D. Brazill, is a story about a retired detective sent on a mission by an exotic and beautiful woman, powered by the full moon and rage from within. It is beautifully descriptive in both forms and there is no shock ending because, frankly, it does not need one. The protagonist, Roman, is often seen inside a bar, and very much feels like the kind of place you'd walk into on the outskirts of any major U.S city, only inhabited by the occasional supernatural and a group of punks you don't want to give lip to.
The Stalking Rail, by Alejandro Omidsalar is a gritty, urban-noir tale of a young man walking into a world, and even after reading the last word you're still unsure if it's fantasy or real, full of graphic violence and unknown purpose. This story is almost definitely split in two, with the start following Tomas through the dark gloomy streets of Los Angeles during a rain storm to meet his oldest friend and lover Enrique, to waiting for the Metro where the world you'd been reading about changes course entirely, throwing him into a situation he neither understands nor knows what to do. Although it is presented in third person you are as clueless as he is, keeping you on the edge of your seat even after it is finished.
Each story is beautifully illustrated with a single picture created solely for that tale. All of which capture the essence of how different each of them really are. The only complaint I have overall is sometimes the illustrations are posted a little early in the story, perhaps giving away any sort of plot point before you've read it. Not many people will be able to refrain from looking as our eyes are instantly attracted to the mix of colours, contrasting against the black lettering.
If such stories as The Raven and The Tell Tale Heart, from Edgar Allan Poe, The Tree, from H.P Lovecraft or even Trainspotting, by Irvine Welsh, or Fight Club from the transgressive icon Chuck Palahniuk stand confidently in your collection, then Dark Valentine can't be recommended enough to you. Your eerie intrigue, your wish to escape to another world and rebel within will be entirely satisfied inside all ninety one pages of the Spring issue. And I for one cannot wait until I can dig my claws into the Summer issue.
Posted by All Pulp at 5:17 AM