AP: Welcome to ALL PULP! First, can you tell us about yourself, some personal background? 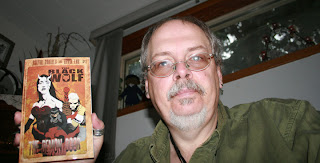 CD: Well let's see, I was born in the suburbs of Granton City ... Oh wait, that's not right. Darned fantasy world encroaches on reality at times LOL. I was actually born in Saskatchewan (sounds more made up than Granton City doesn't it), in Canada. I was a farm boy who sort of backed into journalism. I had no
formal training when started doing sports at hometown paper – the Tisdale Recorder.  A dear friend of mine, Brenda Campbell, actually awoke my fictional muse, and in time that led to a book of short
stories on hockey (How Canadian is that). It is called Skating the Edge, and actually had a small review in the Globe and Mail out of Toronto, one of the major dailies up here.  From there two non-fiction books followed and 25 Saskatchewan Weekly Newspaper Association awards happened before turning to pulp fiction stories.
AP: As a writer, what influences have affected your style and interests the most over the years? Do you have a particular genre/type of story you prefer to write? 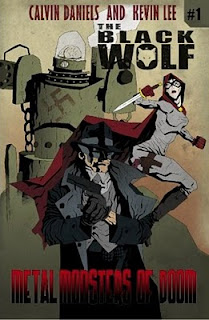 CD: I suppose every book I ever read, and every person I have met is an influence even if we don't always recognize it. In more specific terms fantasy is a favoured genre, and comics. I collected
for a while, with Batman at the top of my list.  The love of Bats is a definite reason for writing pulp-inspired tales now. I like the idea of period pieces in 20s/30s because it allows for the anonymity a hero requires.  In the current era of GPS, cellphones and Internet, Batman's identity would be known in a week, and bad guys would have killed him 37 times by Tuesday.  By setting The Black Wolf and our other stories in the past we allow some reasonable belief they might keep a secret identity secret.
AP: What about genres that make you uncomfortable? What areas within pulp are a little bit intimidating for you as an author?
CD: Not sure I've found one. I have a character Dark Heart. She operates in the 'old' part of Granton City. It's sort of a bloodier Sin City, more 'adult'. I have no problem with the concept, but I have co-authors run from it.
AP: Are you a pulp fan? If so, how has that affected you as a writer of pulps. If you aren’t a longtime fan, then why pulp?
CD: The Spider and the old purple clad Phantom are favs. I haven't read a library of pulps though. In fact I find some of the hyperbole of the old pulps a bit too over-the-top. That said the idea of a lone hero, The Black Wolf, Ghost Wind, The Starling, with no real superpowers protecting a city intrigues me.
AP: What do you think you bring to pulp fiction as a writer?
CD: Hopefully the 'feel' of the old heroes with less of the hyperbole. Hopefully a bit more truthful too.
By that I mean characters will die and stay dead. Our heroes will kill rather than trust the courts to let a criminal off on a technicality. I mean really how many times can The Joker escape before Batman clues in and kills him? Of course truth is limited by the genre too. It comes to perspective. A recent reviewer noted as a war vet the fight scenes in Unit 13 didn't ring true to him, which is a comment I respect.
However, by genre we don't write for that sort of 'real-life' accuracy either. Did anyone buy the scenes in the recent Green Hornet movie? The stunts were almost all proven inaccurate on The Mythbusters. The Batman movies, comics and books are the same way. We write worlds were exaggeration is a must. From kung fu movies, to heroes and scifi/fantasy. As readers we ask you to suspend belief on page one, and just enjoy the ride.  But, we do take a somewhat more realistic vision of heroes in the sense they are not all shiny, goodie-goodie, two shoes *smile. 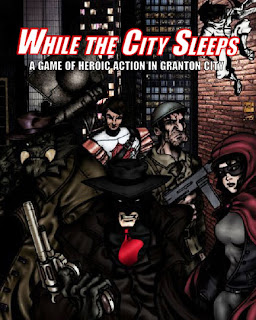 AP; Tell us about the Black Wolf and some of the other characters you work with. What is Granton City all about?
CD: Granton City started off merely as home to The Black Wolf, a pulpish hero facing everything from common thugs to the supernatural.  From there the city 'grew'. Ghost Wind is sort of a Bruce Lee-ish hero in the city's 'Chinatown'. This title really brings Japanese Manga/Anime together with a touch of pulp.  Crake & Crane Casefiles is being written. It's sort of the Johnny Depp character in From Hell meets
Mike Hammer, mixed with the Odd Couple. Crake is a veteran of the Great War, a hard-boiled detective, working with Crane, finely dressed, man of strange science. Together the PIs work cases in the city. Dark Heart is in 'old town'. Blood, death, sex, only thing missing is rock 'n roll.  Outside Granton City other titles exist in the same world, Unit 13, Drago Demon Slayer, Churchill Alien Bounty Hunter and The Starling among them.
AP: What is your creative process as far as developing a character?  What techniques or steps do you take?
CD: I get a flash of an idea. It rolls around in my head for a while until the voice gets so loud it has to get out.  Probably coming from my journalism background, I look at chapters as sort  of assignments and just sit down and write. Since I work with co-writers always inspired by what they do.  We use no pre-planned story outline. It's very much follow-the-leader as we weave the stories. 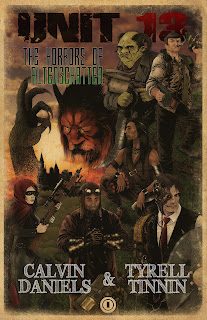 AP: What’s coming from Calvin Daniels and Granton City? Any projects you want to discuss? Publications?
CD: To start a tip of my hat and heartfelt thanks to Kevin Lee, Mitchel Rose and Tyrell Tinnin for their support, effort and words as co-writers on The Black Wolf, Ghost Wind and Unit 13 respectively. Without them the already in-print titles from Granton City Press would not exist.
It's been interesting how many people, connections you need in this sort of project, great cover artists like Daniel Bradford, Guillermo A. Angel, and Gil Murillo, the editing eyes of Dixie and Sandy, our fans and readers who encourage us, and sites like this which help us promote.
As stated earlier we have a number of new titles in development. That doesn't mean we are forgetting those already out. The Ghost Wind #2  - The Runaway Princess is mere days from written, and Black Wolf #3 should be started by the time readers see this. With upcoming titles expect to see a major cameo by another current Pulp-hero, and we are hoping for a few bonus shorts from some established and new writers too.  We just hope readers come along for the ride.
Posted by All Pulp at 9:08 AM