WARNING!! If you are one of those adult type readers who believe that as you age, your reading choices should mature, become less exciting, more prose than picture, and border on bland and spoon fed to you, then STOP READING! This review IS NOT for you!

For the rest of you who actually probably enjoy life and love things both nostalgic and cutting edge, continue on with my blessing... 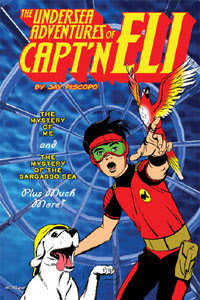 For those who aren't Facebookers like most of us, you might not know who Jay Piscopo is.  If you travel in the social network circles most of our readers do, though, it is likely.  Jay is an accomplished creator that has also proven to be one of the best I've seen at self promotion.  Whether it be work on his original creations or his awesome takes on classic pulp characters or his breathtaking renditions of the work of others (He's the guy behind my much bally hooed YESTERYEAR novel cover), Jay has made a name for himself as being up and coming, awesome, and dead on with his work.

That reputation is furthered by this first volume of THE UNDERSEA ADVENTURES OF CAPT'N ELI, Jay's own tale put out by Nemo Publishing set in a wild and wonderful universe all his own.    This graphic novel/digest like tome centers around Capt'n Eli, a genius of a boy who has a very familiar feeling origin and takes off almost from birth on adventures that while reminding some of us of things we've read or seen in the past, manage to be innovative, original, and exciting.

Jay brings all his creative wonder to bear in this first volume of Capt'n Eli's adventures.   Within this you see tips of the hat to adventures and creators of the past as Jay's influences for both art and story are pretty obvious.  Capt'n Eli has traces of Johnny Quest, Superman, Doc Savage, Tom Swift, and the list goes on.  But what makes this cool is although you, if you're a reader steeped in this Saturday morning/pulp magazine stuff, get all the references, they are simply that.  References, little things that Jay does with the story or the art to put you in mind of what we all thought was a simpler time, a time when storytelling was about telling the story and the art backed up the story, but didn't overshadow it. 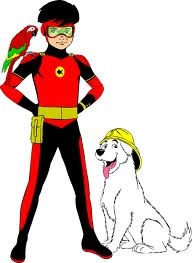 In this first volume, we get Capt'n Eli's origin, his first meeting with and hints of connection to Commander X, Jay's mix of Doc Savage and Captain Nemo that is DEAD ON, Eli's teaming up with a crack team of sea based heroes, and two of the coolest sidekicks in a long time-Barney, the knot tying dog and Jolly Roger, a parrot of some years who knows seventy languages.  Oh, and time travel, strange ships, a historic moment (literally) and so much more!

Also included in the volume is a story from 'the golden age' of Jay's universe done very much in a golden age style that showcases Commander X in his hero days along with two others that make up the Big Three.  Stir this in with words from Jay, a hit-the-head-on-the-nail introduction from argon Zark! creator Charley Parker, and pin ups by Steve Rude, Herb Trimpe, and Howard Chaykin, and you have one classic, now and later, tale that makes me want to watch Boomerang late at night to see more stuff like this!

The layout of the book is awesome, part action adventure comic, part edutainment (and not boring edutainment, but story supporting, mind enhancing edutainment), and part sunday newspaper comic strip!  I enjoyed the size of the book, not a TPB size, more digest like, and the overall layout does what a layout should do, makes the book stand out among others and not only compliments, but adds to the tale it tells!

The only thing I found a bit hard to deal with at first was the mix of art with 3-D backgrounds.  Although stunning in many places, I initially had a little difficulty with this, mostly because the look is a bit jarring at times.  I will say, though, about halfway through the first read of this, I was not only adjusted to this mix of things, but actually enjoyed it quite a bit.  It added a bit of uniqueness to the book as a whole.

FIVE OUT OF FIVE TIPS OF THE HAT-Probably the best comprehensive (touching many points of my inner fanboy) read that I've had in a long time!  Thanks, Jay!
Posted by All Pulp at 8:19 PM