Martheus Wade on Ninjas, Fate and Free Will

I fell in love with Martheus Wade’s work when I visited his website.  The series Jetta:  Tales of the Toshigawa at first glance just looks like superhot ninja babes battling, which while in itself is a fun guilty pleasure, the book is deep
Shianndrea Toshigawa, codenamed Jetta is the chosen one.  She is the one that has to beat Terminus and his demonic horde.  To make matters interesting, Terminus is her father but perhaps the clincher for me is that the last thing Jetta and she doesn't want to be that person.
Questions of free will and fate, the natural conflicts of wanting to be your own person over being a person you’re supposed to be is just an intriguing story to tell.  There is a depth and sophistication to the graphic novel that engages in ways few stories dare to tread.
Martheus Wade has written a tale nearly as engaging as he is.  We discuss Jetta, and his other series Turra – Gun Angel as well as some of life’s great questions.
All Pulp:   How did you get into comics? Who were your influences?
Martheus Wade:  I got into comics when I was really young. Comics were my gateway into reading when I was a kid. It was also my gateway into art itself.   George Perez, Masamune Shirow, Jim Lee, Marc Silvestri, Adam Hughes and Adam Warren were all huge influences on me. But also early on, animation really guided my artistic eye. Anime was a heavy influence on me. Speed Racer, Voltron, Robotech. Tranzor Z. It all made me stop and take real notice. 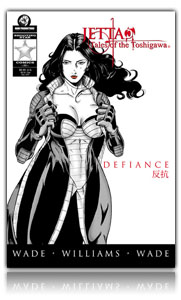 AP: Tell me a little about Jetta: Tales of the Toshigawa. What’s it all about?
MW:  Jetta: Tales of the Toshighawa is my creator owned graphic novel series that centers on Shianndrea Toshigawa. Code named “Jetta”, she is the chosen one of the Toshigawa ninja clan who is meant to defend the world from the demonic army known as the Knave. The leader of the Knave is the godlike Terminus, Emperor of Japan and the father of Jetta. In order to defeat this demon army, Jetta has been forced to leave her family and friends in order to train for the day she will be forced to face her father in combat. However, she only wants to lead a normal life away from the clan and far from any prophesied destiny.
But, she is always forced back into a fight that she does not want; fight where friends die and her hope for happiness continues to slip away.
The story is full of martial arts action. Jetta is a super powered  ninja that learns to use new and exciting powers almost every volume. She also has to deal with her on-again off-again relationship with her fellow ninja, Kim Shibata. The two of them have polar opposite ideas of what they should hold important in their lives. Kim is very much into his duty and believes in fate while Jetta believes in free will.
Even though they love each other deeply, their butting heads has dire consequences. The story also revolves around Turra Shibata, Jetta’s best friend and Kim’s sister.
Turra has rejected the ways of the Toshigawa and has gone off on her own. As the “Black sheep” of the clan, Turra is happy living her own life away from her duty. However, things take a turn when she is
forced back into action. The theme of fate verse free will runs throughout the series.
AP: To date, what is your favorite scene in Jetta?
MW: There are a couple of scenes. One scene is in Jetta: Tales of the Toshigawa - Revelations when Jetta confronts her father, Terminus for the first time in the bullet train station. This is the first time that Terminus is seen as the all powerful character that he is. Another of my favorites is a slower scene from Jetta: Tales of the Toshigawa - Defiance where Jetta is on a date with her new boyfriend, Dan, and the two are talking about their outlook on life and what they want out of it. Still another scene in Jetta: Tales of the Toshigawa - Rain is when Turra sees her father for the first time in over a year just before he dies. There are so many great moments in this series. It's really hard to try to pick only a few.
AP:  What is it about fate and free will that fascinate you? 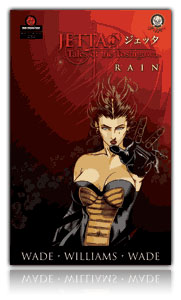 MW: That battle between fate verses free will has always been a very real conflict in my own head. As a creative person, there have been moments in my career (as well as personal life) where I found myself working upstream. When I let go and went with the flow, things seemed to work out with less of a struggle. However, doing so meant that I had to let go of preconceived notions of where I should be or what I should be doing. My life and career took turns that I hadn’t thought of before and I ended up a completely different person than I thought I would be.
Is that “fate”? I would think so. I don’t have all of the answers to that. However, in realizing that it could be fate, I also realized that the life I wanted to lead when I was younger was not the life I was supposed to lead. That’s a hard pill to swallow and (whether it’s right or wrong) I still struggle with that concept on many different things. I want to believe in free will. I want the ability to say that, “If I walk out this door and put my best foot forward, I will get to where I’m intending to go”. But, as we know, that’s not always the case.

This is the basic idea of Jetta: Tales of the Toshigawa. Through all of the attractive women, the martial arts action and scifi, the story is about Fate verses Free will.
AP:  Would you have been happy with the life you wanted?  They that the grass is always greener on the other side...
MW: That's a good question. I don't know. There would have been so many things that would be vastly different. Not better, just different. There are a lot of things that would change like my family that I could not envision living without now. Knowing me, if things did go exactly as I planned, I would still feel like something was missing.
AP: Is it too early to ask you about Turra: Gun Angel?
MW: Absolutely not. Turra: Gun Angel - Bombs and Betrayal is a spin-off graphic novel that takes place in the Toshigawa universe. The lead character is Turra Shibata. She is the sword sister to Jetta and fellow Toshigawa ninja.
In Jetta: Tales of the Toshigawa - Rain (The second book in the Toshigawa series), Turra gets her own assignment and is ordered to return to Japan in order to help organize the splintered ninja clan. But when she gets home, she quickly finds that she on the most wanted lists of, not only the Knave, but the police, the Yakuza and a rival ninja clan. All of this and she still has to deal with her boyfriend, Cyan, and his wandering eyes.
Bombs and Betrayal is a bit lighter than the main Jetta series. Turra, as a character, is a lot more relaxed than her sword sister. She is a lot more comfortable with being an attractive ninja bad ass. In the
main Toshigawa story, she was a bit of a wildcard and this story has more tongue in cheek comedy because of the interaction of the characters involved. Cat (one of the main characters of the series and
this spin-off story) is an African American kickboxer who finds himself faced with culture shock when he makes it to Japan. Cyan is a charismatic pyrotechnic who flirts with other women just to get under
Turra’s skin. And Nica, is a young Toshigawa ninja who is just learning the ropes and idolizes the “legend” that Turra has become.
However, the story is still a serious one and Turra finds herself faced with the difficult task of being called upon by duty to lead this ragtag group in hopes of saving the Toshigawa clan from certain death. It’s a fun read and ties perfectly into the main graphic novels.
AP: Anything else forthcoming we can look forward to?
MW: There is a HUGE announcement and a sort of partnership that will be revealed coming up really soon that I wish I could spill the beans on. That will be hitting in the next month or so. I am also working with Sean Taylor (writer for IDW) on the further adventures of Turra Shibata. The first issue of the miniseries will be out later in 2012. The next Jetta GN will be out at the end of 2012 and marks the end of this story arc. It also closes this chapter on Jetta's life so I'm excited (and a little saddened) to see what readers think of the close of our story.
AP:  You get the final say here.  Plug your books.  Where can I find them. 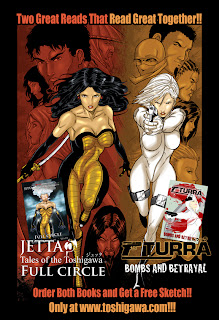 MW: All of our books are found at www.toshigawa.com. That is where we have every book on sale as well as art prints and specialty items. Right now, we have two new books that are available, Turra: Bombs and Betrayal and Jetta: Tales of the Toshigawa -Full Circle. These books intertwine these two beautiful ninja into two halfs of the same coin! Seamlessly follow Turra’s adventures and see where and how they effect the greater Toshigawa Universe in Full Circle. We are offering these two books together in one pack. For a limited time only ( as an added added bonus ) if you grab Jetta: Tales of the Toshigawa – Full Circle and Turra: Bombs and Betrayal together in this Ultimate Combo pack, I provide a free sketch of one of the characters in the series. That's over 150 pages of action packed content plus a free sketch. I invite everyone to try these books and I can assure you that you will not be disappointed.
Also you can follow us on facebook under MAW Productions. Join our page and every friday at 9:00 pm, we have a live chat where the other creators and myself get together and talk about the Toshigawa Universe of characters, the comic book industry, and entertainment in general. It's a lot of fun and I hope you join us!
Posted by All Pulp at 4:59 AM