Derrick Ferguson Has THE CUTMAN In His Corner! 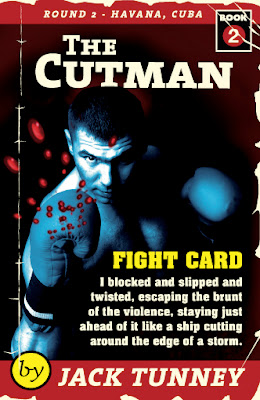 Back during the heyday of the Classic Pulp era there were magazines devoted to just about every type of genre you could think of or that publishers thought they could sell to the entertainment hungry public.  Most of us are familiar with the hero pulps, the western pulps, the science fiction pulps, the horror pulps.  But there were far more than that.  You had your spicy pulps which was a safe name for what was pretty much soft core porn.  There were gangster pulps, railroad pulps and sports pulp.  And a sub-genre of the sports pulp was boxing pulp stories.
If you’re at all familiar with the boxing pulp genre it’s probably because of Robert E. Howard and his champion boxer character Sailor Steve Costigan.  Even though Howard is best known as the creator of Conan, King Kull and Solomon Kane he wrote more stories about Sailor Steve Costigan.
It’s probably inevitable that in the New Pulp Renaissance we’re enjoying right now that the pulp boxing genre should also enjoy a revived popularity and it’s a genre that’s well represented by the the Fight Card series of books in general and THE CUTMAN in particular.  It’s the second book in the series but you don’t have to have read the first one in order to enjoy it.  The books are credited as being written by Jack Tunney but that’s a “house name”.  The first book “Felony Fists” was written by Paul Bishop and THE CUTMAN was written by Mel Odom and it’s a terrific read.
First off, it’s set in Havana, Cuba during a period of history that fascinates me; the period when American organized crime worked hand-in-hand with the Batista regime, turning Cuba into a playground of illegal activity.  It’s here that the cargo ship Wide Bertha docks and it isn’t long until one of its crewmen, the two-fisted Irishman Mickey Flynn runs afoul of the henchmen working for small-time gangster Victor Falcone.  And this in turn leads to Mickey having a beef with Falcone himself who has aspirations of moving into the big time by currying favor with Charles “Lucky” Luciano.
The boxing angle comes into the story due to Falcone’s sponsorship of savagely brutal  backroom boxing matches which is dominated by his fighter, the human buzzsaw “Hammer” Simbari.  Simbari is a bloodthirsty sadist who derives extreme satisfaction from beating men half to death in the ring and the inevitable battle between Mickey and Simbari is written with a great deal of tension and suspense as we’ve seen what Simbari can do and so has Mickey.  And he’s not all that sure he can take Simbari.
Not that he has any choice.  In a series of plot twists I wouldn’t dare reveal here, the fate of Wide Bertha and her crew rests on Mickey’s exceptional boxing skills, skills learned from the legendary Father Tim of St. Vincent’s Asylum For Boys in Chicago.  Mickey’s got no choice but to climb into the ring with this near unstoppable fighting machine.
THE CUTMAN has got a lot going on besides the boxing.  There’s a whole host of supporting characters that added greatly to the flavor and atmosphere of the story.  Colorful, delightful characters that reminded me of those great supporting actors in those classic black-and-white Warner Brothers crime/gangster movies of the 30’s and 40’s.  In fact, that’s exactly how THE CUTMAN reads, like an old fashioned Warner Brothers movie.  The crime elements are interwoven with the well written fight scenes and there’s even a romantic subplot with Mickey and a lusty gorgeous Cuban barmaid which doesn’t go the way romances in this type of story usually go.
So should you read THE CUTMAN? I certainly would recommend it.  It’s a solid page turner that does exactly what I think a pulp story should do; keep you asking; “what’s going to happen next?”  It’s very well written with snappy, slangy dialog and good descriptions of the fight scenes.  At all times we know exactly what’s happening and why.  I’m most certainly going to be reading “Felony Fists” in the next few days and keeping my eye out for future volumes in the Fight Card series which are available as e-books only.
Posted by Derrick Ferguson at 9:49 PM